Hello my name is Aril and I am crisp monster....except crisp packets are not recyclable oh apart from ones that come in cardboard tubes [where there's a will there's a way....snigger]. I still very occasionally buy them in the foil packets, but in a bid to reduce my landfill rubbish yet further I have donned my thinking cap and come up with a couple of solutions.

Cleaning the cupboards before I went away I found an opened packet of popping kernels. They are slightly out of date but what the heck. They are a much cheaper option than any premade stuff and I hope to have a bit of fun experimenting with new flavours over the next couple of months. First off was salt and smoked paprika. Though I say it myself very moreish....even the teenogre gave it the thumbs up when he staggered in from a long shift on Saturday night, scarfing down a bowl full before he shot back out of the front door on some secret social mission.

This was yesterday's savoury snack of choice. Marmite and poppy seed cookies. Obviously being a tight fisted old bird it was the supermarket own brand version of yeast extract, but they too have met with approval from the chaps here at GBT. Recipe here for anyone who wants to venture out into new waters https://witness.theguardian.com/assignment/571795dee4b0acc447fb3904/1998208 Mine were quite crumbly but that maybe down to the fact I used all plain flour. 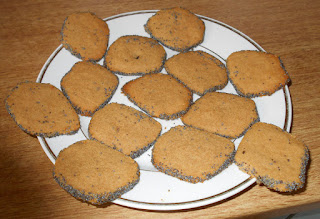