Lusciously lovely locations beginning with L from our recent hols. Highlights from each over the next couple of posts.

Starting with Ludlow.....it was the first official slow town encouraging the slow food movement and it certainly has that relaxed vibe to it

The castle has had a turbulent history. At points it's been owned by the crown and was the property of Richard, Duke of York and later became the property of his son Edward IV. It was seized by the Royalists at one point during the Civil War and has also served as the Council of the Marches in Wales. Nowadays it is run by English Heritage. 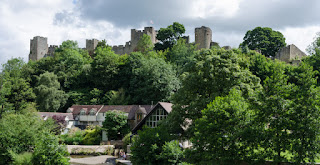 Naturally we paid a visit to St Laurence's [you have to earn your stripes as a church crawler you know!!]. It is particularly well known for the incredible set of misericords it boasts, but I shall show those another day. This I rather like. It's the Housman quilt which was made by the Borderers Patchwork and Quilting Group to mark the centenary of "A Shropshire Lad". The hills are depicted in blue to reference the poet's "blue remembered hills". 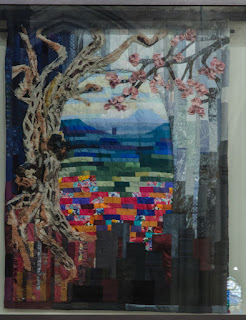 Currently underway within the church is a reconstruction of a medieval organ. Like the blousy, brightly coloured interiors of the contemporary churches I think this would have blended in perfectly at the time. It looks strangely garish and almost fun fair like to my modern eyes.

Strange faces and carvings abound within the church. However, I shall show restraint [for once...probably never again so make the most of it folks] and just show you one of the roof bosses to give you a flavour. Quite a dramatic Denis Healey set of eyebrows she's sporting there! 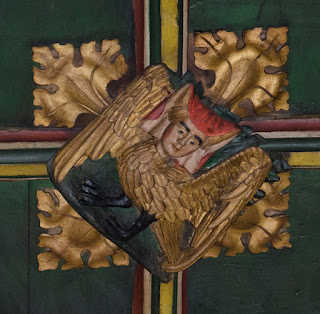 The famous Feathers hotel. Built in 1619 it sports some tremendous Jacobean carving. Sadly I am unable to bring myself to cross the threshold for fear of being evicted since a memorable visit at age 16 with my parents where I disgraced myself. I allowed myself to pass wind silently and unfortunately it was one which would clear a crowd at 100 paces. My family still remind me of this faux pas with great glee and I suspect there remains a wanted poster with my face upon it within to this very day! Anyway back on topic....close ups of the roof line and some of the figures. 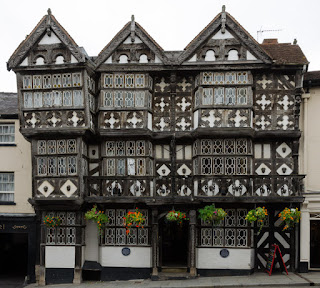 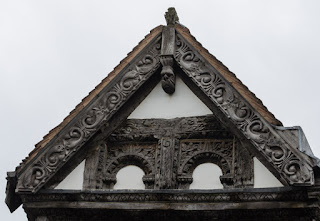 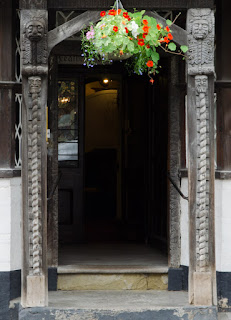 The main streets are a mass of the most gorgeous black and white timbered buildings and beautiful floral displays. Definitely always one I enjoy going back to. 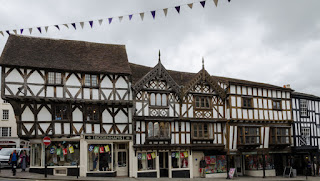 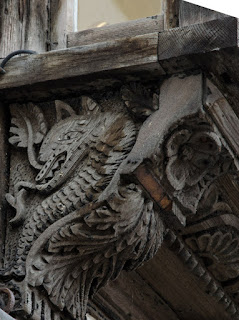 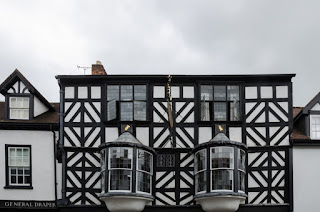 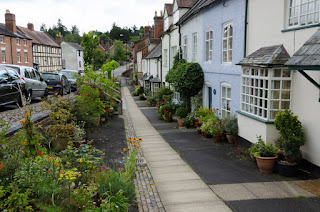