Signs of the Times

I'm currently in a catch-up/review phase so am looking at different options and tweaking things. This is quite a regular thing with me as I don't like to stagnate. In a bid to claw back a bit of time...or put it another way stop twonking about unproductively I've closed my social media account and posts here may be a little less frequent. One of things I have been doing is editing and sorting out my backlog of photos. Whilst doing this my funny old brain puts all sorts of strange connections together [my wiring is quite off beam sometimes!] and ideas for future material. Today's content is a product of one of my simple observations.

Always partial to a contrast I clocked these signs on my travels. The one referring to the sat nav is one I've only started seeing in the last few years. It is very much of now and hopefully has saved a few unsuitable vehicles becoming stuck in places they were never designed to tackle in the first place. This is the first time I've been able to photograph one as I'm usually in a moving car! 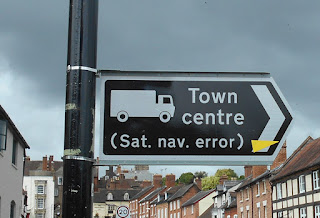 A much old style of signage. I'm sure nowadays it would be up on a post rather than stuck on the side wall of the corner cottage.  It is apparently a pre Worboys sign. A committee headed up by Walter Worboys in 1963 met to decide upon how traffic signage should be designed with the resulting changes being rolled out on 1st January 1965. 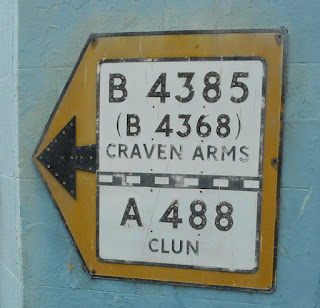 Finally this one....a survivor from bygone times. It hangs on the wall of a hotel in Bishop's Castle. 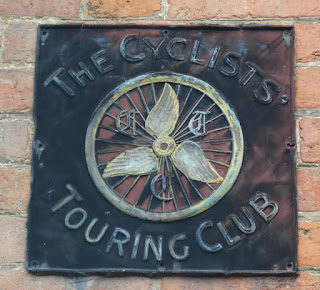 Formed in 1878 the CTC still exists, but underwent a name change this year. It's now Cycling UK.