The warden of the local nature reserve very kindly opened out of hours for us and took us on a guided walk around the reserve earlier in the week.

Seeing wildlife in the evening is not something I get the chance to enjoy very often so it was a delight to see a skein of grey lag geese flying overhead to their night time roost. "Don't open your mouth" he warned as they swept above us. At this time of year they are moulting and the mill pond around which the reserve is based is full of shed feathers now.

Time spent in the biggest hide revealed a very proud Little Grebe with his youngster paddling along in front of him. The female has made herself scarce by now but he continues with his parental duties. The two were the same size [quite dinky actually] but with different markings. We caught a glimpse of sandpiper and the back view of a kingfisher as it shot off away from us. This year's brood of herons were also at the water's edge. The adults have already headed off down to the coast and will not return until December when they start nest building again. This crop of youngsters will be seen off and will only come back a year later when they too will be able to breed. It was interesting to hear that the first lot of Red Kites tried to nest at the site this year....they rather unfortunately chose the heronry and the bully boys soon had them evicted.

Wandering around the warden was constantly feeding us fascinating details about what we were seeing and explaining some of the problems they are currently facing. They are almost totally reliant upon the efforts of the volunteers to carry out the maintenance and bring forth the vision they have for improving the area and attracting even more wildlife species. Thankfully they are able to call upon a very dedicated band of helpers- 40 people turn up twice a week to move things forward as well as all the others fundraising in the background.

This past couple of years the woodland area has been greatly opened out to create glades and butterfly rides. One of the former muddy paths is now a tremendous bark chippings affair and was all the work of the members of the Green Gym. Immaculate at the close of day the warden would return every morning to find the chippings thrown all over the place and the edgings wrecked. This ongoing problem was put down to kids coming in at night time and in a bid to stop the behaviour a camera was installed. They found the culprits but not the bipeds they were expecting but a cete of badgers [don't be impressed goggle is my friend!] digging for worms! It is hoped that these changes will encourage the dormice to expand their territory which they have been very reluctant to do so far.

Some of my personal favourite snippets were the roe deer which come into the feeding station every evening to hoover up the seed that the birds have dropped during the day [we saw one in action], the tawny owls that have discovered a love of fishing in the lake [bones found in the pellets] and the harvest mice which insist on living in an area which floods in the winter. The solution has been to leave unsightly clumps of goat willow for them so that they don't drown. Their numbers are dwindling but they breed well here and many are transferred to other sites owned by the council to increase the success.

I feel lucky to have seen some new things- Cricket Bat Willow, White Poplar [originally planted for matchsticks], Gypsywort and this one Sneezewort. It gained its name from the tradition of drying its leaves and using them as sneezing powder. The light levels were dropping too fast to take any more than this single shot. A thoroughly enjoyable experience. 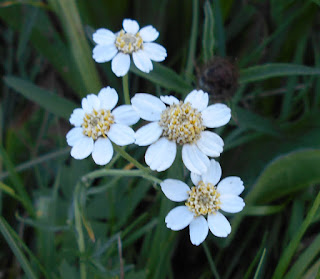