My birth county of Essex has a bit of an undeserved reputation at times for being the sort of place you should just pass through to get to wherever you're headed as soon as possible. Certainly it has its grotty areas which are the ones which seem to attract all the attention, but that's par for the course pretty much where there is any type of development. I may not live there, but I have visited family many times and the truth is the further north you go the more gorgeous it becomes. The medieval town of Saffron Walden is a case in point.

Built upon the fortunes of the saffron trade, the Crocus Sativus was grown locally until the 18th century when it saw a sharp decline. There are several references to this part of the town's history in the local church. Later on brewing saw a revival in its fortunes. 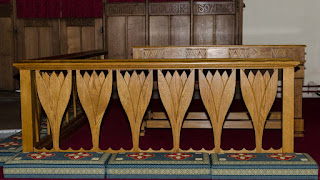 It's a place which is delightful to just spend a couple of hours in just mooching around and seeing what you come across. The centre is very attractive, but I think, had we not wandered off in search of the mazes [see my earlier post this week if you're wondering what I'm talking about] we'd have probably missed some of its gems. Unlike many places where so much has been destroyed in the face of modern development, this is a place which has managed to hang on to many of its older properties which in turn gives it a strong sense of continuity. 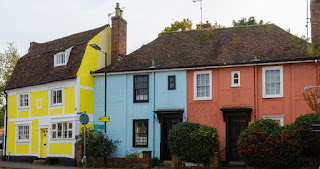 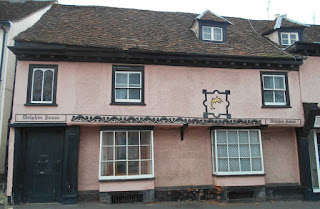 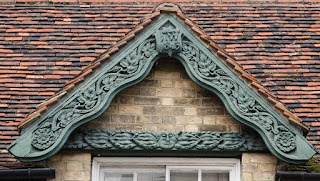 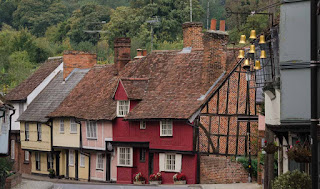 This was one of our little finds we came across when we strayed off the beaten track. If you approached it from this direction it would hardly impress you now would it! 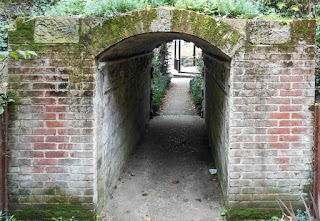 However, once you've got to the far end of the tunnel this is what greets you if you look back. It reminds me of an 18th century grotto and I'm delighted to say that all the carved stonework continues inside. 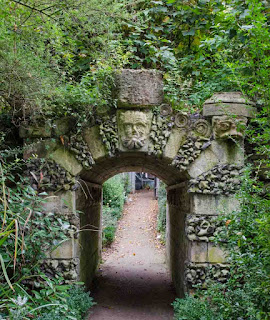 For me, besides the beautiful colours of the houses, it's the pargetting which I loved. This type of waterproof plastering is common to East Anglia [it's known as pinking in Norfolk] and there are some lovely examples. I think this one won the top prize for me though. The former 14th century Old Sun Inn was Oliver Cromwell's HQ in 1647. There is a school of thought which supports the argument that the two figures depicted are representations of the giants Gog and Magog or alternatively Tom Hickathrift and the Wisbech Giant.  As for the single leg.....any suggestions most welcome! [I now know this to be the sign for a corncutter [or chiropodist as we would call it in today's parlance] 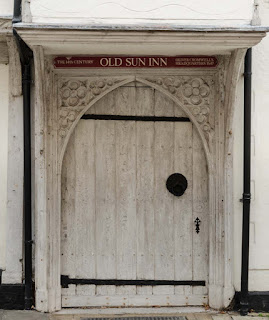 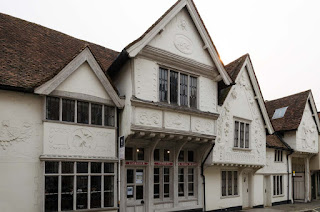 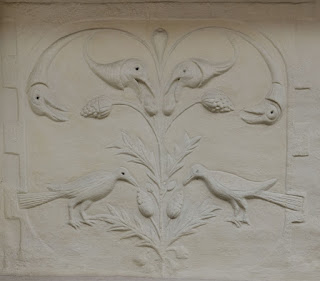 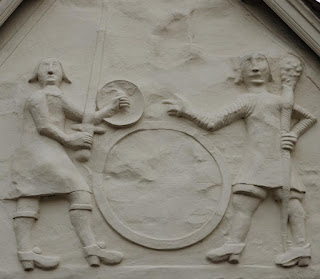 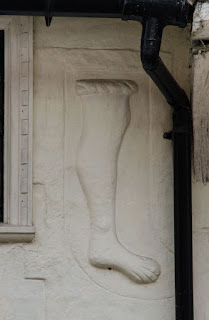 It truly is a little gem of a place!