Aah October...the traditional month for squashes, pumpkins and gourds. Footage of those massive pumpkins people grow [any mega sized veg draws my attention actually] always fascinate me...the sheer effort that goes into growing something of that magnitude. Perhaps then you might understand why I got exceedingly overthrilled when I spotted a massive pair of gourds in the distance on my whip round TYM's university city of choice. 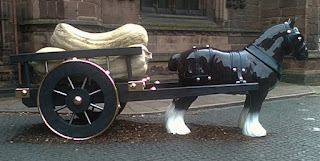 A closer inspection proved that they were about as real as the china horse in front of them, but hey ho you can't win 'em all.

Since I was last on here officially [I schedule posts quite often] I've matured by a year. We played hooky from work and had a day out, but having then followed that by this weekend away working at the NEC [one of our best shows ever😁] I am very weary today. Could I then ask if the lady in the front row wearing the scarlet hat with the purple ostrich feather would be so kind as to pass me the matchsticks please? I shall definitely have need of them in order to convince my client later on that I am bright eyed and bushy tailed. Hopefully, I will catch up with my backlog of blog reading once I've dealt with the domestic trivia that's built up here at GBT later on!