Morning....am most delighted to be able to report that the circular economy is alive and well in this little part of the world.

For many years I've lived with a full length mirror which has been cracked across the bottom corner. Maybe most people would have long since chucked it, I don't know, but it was still fit for purpose so there it stayed. Since the revamp of the bedroom has been completed we've finally got round to replacing the glass, but have kept the same frame. There was a bit of head scratching as to what to do with the original piece.....within a couple of days though a Freecycle message popped into my inbox asking for this very same thing....I explained to the lady about its condition, but she was delighted as she was going to break it up for a mosaic project anyway. Do so love to hear a good reuse story!

Now with the buzz of the Christmas retail spirit really ramping up and the pages in the diary turning quicker than I would like really I've rediscovered the bossy note I left for myself for the beginning of November...that will be the one which reminds me that I have about a sackful of unused Christmas cards in the top of the cupboard having "lost" them last year [ie not actually checked properly!!] and that I going to wrap any gifts in second hand scarves this year. That probably sounds terribly "goody two shoes" doesn't it, but believe you me I have an ulterior motive for that one beyond the green credentials....I absolutely loathe wrapping parcels [in fact I promise Mr GBT all sorts of treats to get him to do it for me if I can!] and I am completely useless at it. Ask any family member who has received one of my dog's dinner efforts and I'm sure they'd back me up. Best get my rump in gear then.....I asked on Freecycle for old headscarves explaining what my cunning plan for them was....I now have all these lovelies from a very generous lady who is clearing her house prior to renting it out. I've got no excuse now have I and am going to have to walk my talk! I think I may spare you the photos of my efforts..... 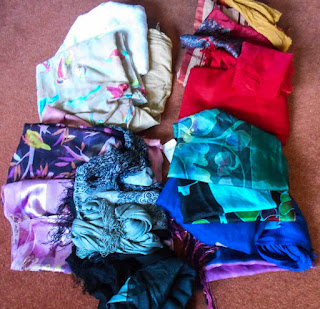 Following on from our successful launch of the Repair Cafe last month, the same freecycler contacted me and asked me if there was anything we might need in the way of sewing stuff as she still has more stuff she wants to move on. Meanwhile another dancing friend has passed over a black bag full of unfinished patchwork projects her late Mother-in-law had and which was destined for the tip. With her full permission to remove anything which caught my eye first, the rest will be reused at the Sussex Green Living upcycling events. Like me, she hates waste and is just pleased to see the fabric being put to good use. This particular piece of patchwork is going to be made into a new-to-me set of curtains which will go brilliantly with my already rather bright and cheery kitchen! 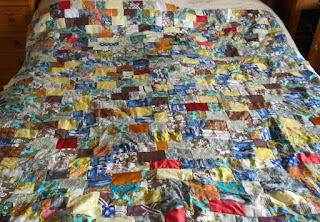