"What will survive of us is love." 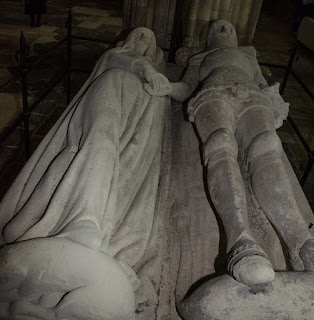 This is the so called "Arundel Tomb" of Richard Fitzalan, 3rd Earl of Arundel [c1307-1376] and his second wife Eleanor. His 1375 will stated that they were to be buried together "without pomp" in Lewes Priory. The demise of the Priory during the dissolution meant that the tomb was moved to its current site in Chichester Cathedral at a later date. To see the two of them holding hands is just so very touching and all the better now that the latest research shows it to be an original feature and not a medieval invention by the Victorian restorer, Edward Richardson, as had been feared [info from the accompanying sign]. It is one of the earliest recumbent knight tombs showing evidence of real affection between a couple. It was the inspiration for Philip Larkin's famous poem which I have added the photo of in below. I've known of this tomb for a while, but was hazy about its whereabouts. It was, therefore, a lovely surprise to chance upon it last Friday. 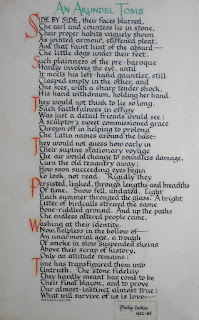