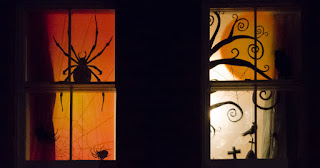 Have you carved your jack o'lantern from your pumpkin then? Afraid I haven't bought one...my one and only attempt at pumpkin soup was hideous and ended up on the compost heap! I have put out all the ancient Hallows decs yet again and Mr GBT recycled the Grim Reaper fancy dress costume which TYM has left here. Me meanwhile.....I invested 85 groats in some "Halloween" makeup in the hallowed halls of Tesco.....as I made up my eyes and lips in a dramatic red/black combo I was channelling my inner Marilyn Manson. I'm not entirely sure that I created quite the look I was going for, as within a couple of minutes of me arriving at the Halloween party on Saturday night, two friends separately said I looked just like Clare Grogan from Altered Images...erm! Definitely back to the drawing board methinks.

At the said party I got chatting to a fellow guest who revealed that she was going to have a go at carving swedes and turnips as they seemed more authentic and predate the American pumpkin tradition. That conversation stirred memories of reading about the Punkie night which takes place on the last Thursday in October in Hinton St George in Somerset.

Punkie is the name given to the hollowed out swede or mangle-wurzel which is lit by a candle inside. Often they would have represented evil spirits and used  as omens of death or to intimidate unpopular folks. Nowadays it's all a lot more genteel with a Punkie King and Queen, prizes for the best lantern, a procession and the traditional singing of the Punkie song:

Make sure the ghouls don't come and carry you off!! Halloween/Samhain blessings to all who are celebrating.

P.S. That is not my handiwork in the photo. I took Mr GBT out last year to admire the decorated houses near here and that window particularly tickled my pickle!