Humphrey keeps, what I would term, teenage hours....he's asleep all day and out on the razz all night. By about 8am he's ready to settle down for his daytime snooze on one of our beds. Generally as a rule that fits in fine with my routine....

When it comes to changing the bed linen he doesn't see why anything should change and that's when the battlelines are drawn. I turf him off the bed, turn round to pick up the clean item in which time he's whipped back on and is sitting tight in his original position. We repeat this scenario several times over except yesterday, after going through several bouts, I'd had enough so I left him on the sheet and pulled the duvet cover over him [not his head]....."that'll learn yer you little s*d" I thought triumphantly imagining that he would shift his plump rump. As you can see though the victory was not mine. 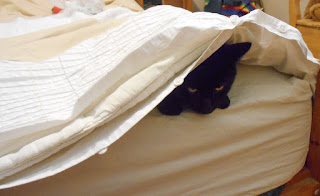 I have retired to lick my war wounds and prepare myself for the next round.