Going round and round..... not in circles as you might imagine, but a mile of loops if you want to get to the middle of this maze. 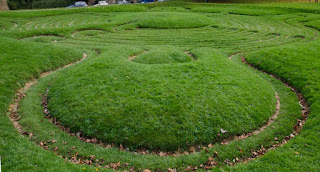 Now you know me by now....if I'm away on a little holiday I like to squeeze as much out of my time whilst I'm there as possible...anything without an outlay is always a bonus and one of the ways I achieve this is to schedule in something to see/do on both the outward and inward journeys. This little joy is the oldest publicly owned turf cut maze in the country and is in Saffron Walden. Nobody knows when it was first created, but the documents show that fifteen shillings was handed over in 1699 for it to be recut. It's a joy...there's something very meditative about following the loops....I'm afraid though that time wasn't on my side so I cheated and cut through to the middle in the end when I realised how long it was! Oops! 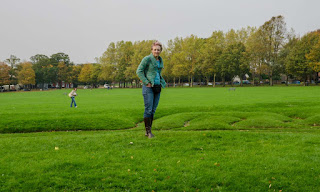 If labyrinths are your thing then Saffron Walden has a whole range on offer. There's a modern one set into bricks, one which is being built right now and laid out with paving slabs and plants and a big old beast of a Victorian one with great tall yew hedges. In my innate wisdom [not] I decided to have a go at this last one just as the sky turned that strange sepia colour last week...it felt a little too reminiscent of the scenes between Harry Potter and Cedric Diggory in the final challenge of the Trizwizard Tournament in The Goblet of Fire for my liking as I encountered different fearsome looking stone creatures around each bend. I was actually quite relieved to get out!!

Nevertheless it proved a unique start to the adventures!