Isn't it amazing how sometimes you will notice a theme running through what you see....for me it's been clocks and not just any ordinary clocks, but clocks with no hands. I didn't set out to intentionally to hunt them down, but find me they did so best just go with it.

This is the Ely Analemmatic Sundial which was designed by Quin Hollick for the Millennium. Rather than try and explain how to use it I've popped up the instructions below. We couldn't resist trying it out and I can confirm that, as the sun was playing ball and shining, it was spot on.

This rather unusual looking timepiece is the Corpus Clock in Cambridge. It was designed by John C Taylor in 2008. It's exact every five minutes apparently....not exactly handy then! 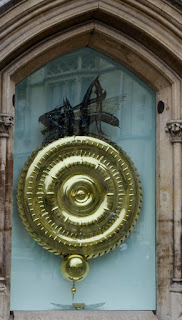 The malevolent looking grasshopper thing perched on top is a chronophage which translates as "timeeater". It operates via three L.E.D rings which mark the hours, minutes and seconds and it marks the hour apparently by the the shaking of chains and a hammer hitting a wooden coffin. All very Gothic....it seemed like it might currently be out of action when we saw it as there was absolutely nothing happening.

To finish...how about this one for a variation on a theme. The Moon Dial on the outside of Queen's College [again in Cambridge]. It has the conventional sun dial, but also can tell you the hour, month, sunrise time and the zodiac [unless it's throwing it down in which case you're scuppered]. The green lines show when the Summer Solstice and the Equinoxes are. If, however, that's not enough for you then you need to turn to the table at the bottom and use the information contained therein to perform a mere four complicated mathematical equations to calculate the lunar motion to give you the time. Oh yes and having completed all that little lot please bear in mind that the moon movements are irregular and therefore, inaccurate. 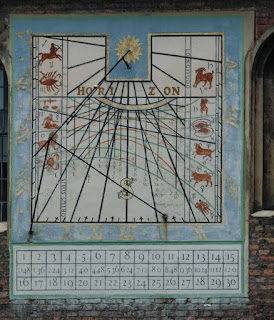 Ye gads....I think I'll just stick to looking at my phone thanks!
Have a good weekend one and all!