When we were working at the Kensington Dollshouse Show a couple of weeks ago this rather large cabinet was standing in the foyer. It's the one which starred in the BBC's adaptation of Jessie Burton's "The Miniaturist". For anyone who wants to see it in all its true splendour I've popped up a short clip which features it below. If anyone fancies owning it it's now for sale, but I'm afraid I didn't see a price. 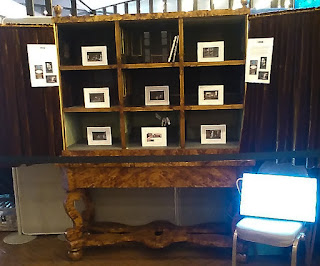 I myself was marvellously disciplined and only spend a tenner on these very realistic fungi [my photo does not do them justice]. They're for my housekeeper [if I had yet bought her that is!] who comes from a long line of cunning women and leads a double life. She has a trunk fulled of all sorts to do with the magical arts hidden away in her attic room! Perhaps in the name of honesty I should admit that many other weeny treasures came home with me....Mr GBT went off and bought me various goodies which will make up the next couple of years worth of birthday and Chrimble gifts. I chose them at the time, but will have long since forgotten what they are before they are given to me. 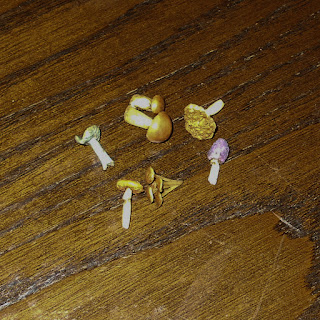 Incredibly there have been some teeny steps forward with my own house. Accompanied by much cussing I finally finished this teeny bell pull. 40 stitches to the inch has driven me stir crazy and I've needed to wear Mr GBT's head magnifiers just to be able to see the canvas. It still needs to be sewn up and I have sworn I'll never do another one. However, I still have a firescreen kit in the same scale to do and I know that I will in the end. It will drive me bat sh*t crazy, but I'm very determined once I decide to do something. 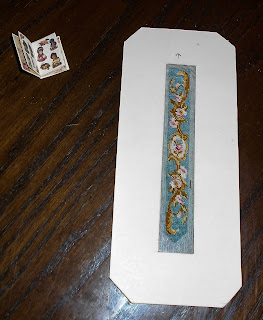 The little book in the left hand corner is proof that I have made small inroads into my stockpile of kits. It helps having a friend like Ice Badger [a fellow Mythago dancer] who shares your dollshouse hobby. She not only has her own unfinished projects, but she sadly inherited all her Mum's too when she died. For several years now we have been talking about spending an evening together to get our houses going again and a few weeks back we finally got going. It was a delightful session and so much yapping that more than once we both stuck our books the wrong way up and hastily had to undo our handiwork before the glue stuck them for good! Ah yes kits...did I mention that I might have a few lurking.... 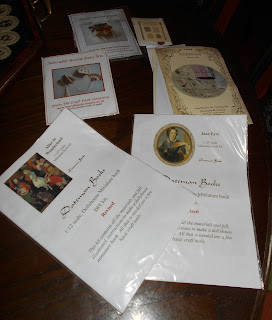 And er I might have found another one lurking when I was trying to track down my next needlework project..... 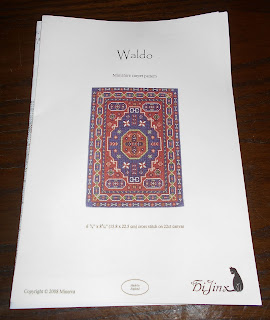 So clearly it makes perfect sense that I've just ordered several more from this company http://www.thecraftpackcompany.co.uk/ because clearly I need more😉 especially factoring in all the ones I've yet to do. I hold Ice Badger wholly responsible...if she hadn't have texted me to say she'd put in an order I'd never have looked....looks like it's just as well that we are planning to get together this coming Monday!

PS On another note entirely please send positive vibes to TYM...the poor devil has got to do his first uni exam at 5.30 today and it's his 20th birthday [teenogre no more]. At least his girlfriend is planning a surprise for him so he's got something to look forward to once he's finished!