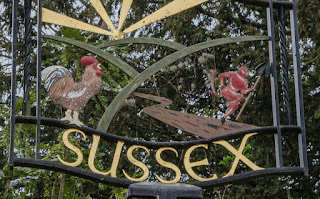 Old Scratch has played merry hell in different parts of Sussex with all his shenanigans👿 This time his handiwork can be seen on the South Downs. In his infinite wisdom he decided that he would rather like to flood all the churches in the Weald. To achieve his aim he started dig a great ditch through the hills towards the sea, but because he was making such a rumpus an old woman lit a candle to find out what all the fuss was about. Panicking he thought it was daybreak and fled before he had completed his task and thus we are left with Devil's Dyke.

If you so desire you can pay your own personal visit to The Horned One and his Missus because they are apparently buried in these two long barrows. Should you actually fancy a natter with the nefarious old devil then it's simply a matter of running seven times backwards round the grave holding your breath.... 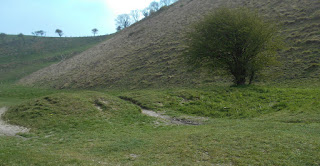 I decided to pass up on this opportunity and chose to watch the mesmerising antics of a stoat. I've never seen one in the wild before and was amazed at the speed and the fluidity with which it moved. What a privilege. No chance of a photo I'm afraid.

John Constable apparently claimed that it was "the grandest view in the world" from the top of the Dyke. Clearly he didn't experience the same weather conditions as us then...I'm sure that there is a fabulous view, but the mist remained constant up high and we couldn't see any of it! 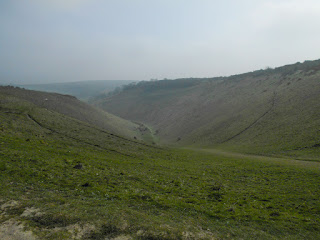 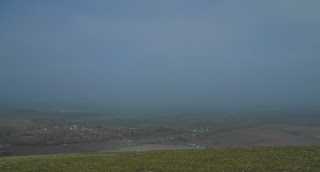 However, further down we were able to enjoy the warm Spring sunshine and the banks of wildflowers. I'll leave you with the delicate Hawthorn arch we stumbled across during our gentle three mile pootle. 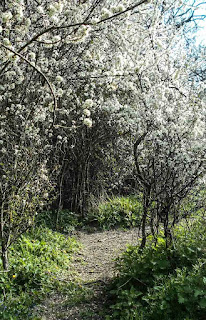