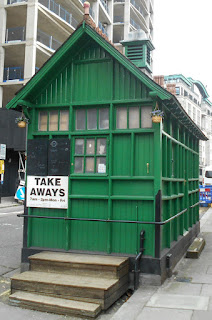 I came across this curious little green building purely by chance when I was walking up from the tube to meet the former blogger Lovely Grey on Saturday. It rang a vague bell and I was sure I'd seen something similar on a TV programme....turns out my instinct was right.

Back in 1875 the Cabmen's Shelter fund was set up to pay for a whole series of these huts across London. They had to be no bigger than a horse and cart because they were positioned on the public highway. Originally 61 were built, but now only 13 remain. Back in the day the hansom cab drivers and later on the hackney carriage drivers were exposed to the elements when taking a refreshment break. Unsurprisingly the warm interior of the pub proved irresistible to many, so this scheme was rolled out to deter the temptation. In here the drivers could get a hot meal and a non alcoholic drink. Today the remaining ones offer a very reasonably priced takeaway service, but even now only those who have The Knowledge [ie London cab drivers] can enter this hallowed space and take a seat. 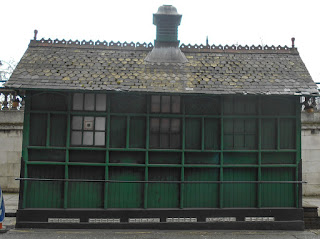 Should you happen to come across one in your travels at least you'll now know what you're looking at!