Another weekend walk with our local friends P & C who have been showing us some more of the delights on our doorstep.

As is usual for this part of the world it involved lots of very ancient timbered farm buildings and barns which I never tire of, but do understand that not everybody wants to see the same thing over and over. This one sneaked under the radar because rather unusually the roof is made up of a mixture of tiles and Horsham stone. Perhaps a cost based exercise [the stone is very expensive] when it needed running repairs. 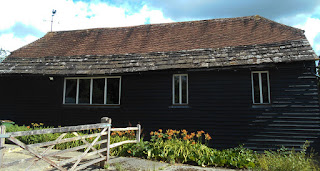 A 'V' shaped stile was the description given on the walk instructions, although I've seen them called pinch stiles when I've encountered them in other parts of the country. Of note simply because you don't get them in Sussex normally. We're definitely a traditional stile style or kissing gate kind of county here. 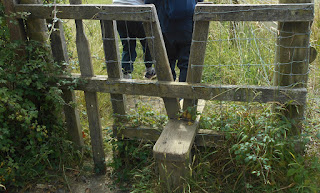 I think this lot must be llamas as they were bigger than the herd we met a couple of weeks back. There are always lots of sheep around here, but I am seeing more and more of these alternative herds, so they must be growing in popularity, but am not really sure why.

This little building stands next to one of the old farmhouses. We wondered if it was a converted chapel...what do you reckon? 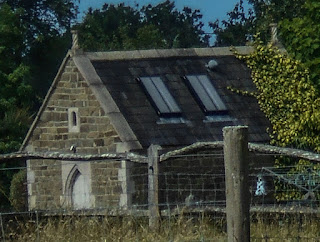 Every walk has a little surprise....a plastic cow and plastic pigs in the farmyard. We were viewing at a distance and thought the goats were plastic too initially...until they moved! 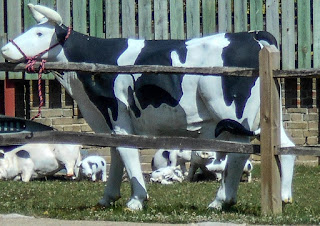 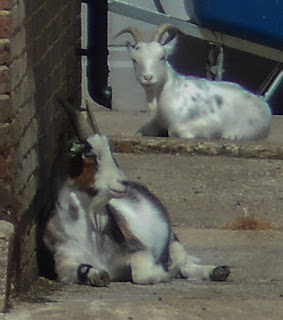 It was with utter joy that we made it to the local parish church in the hamlet of Itchingfield. For the first time in months it was open and with nobody about I sneaked in to take a few photos. It's an 11th century church which has seen much change during its lifetime. This rather splendid chap peers out at you from one of the panels on the font. 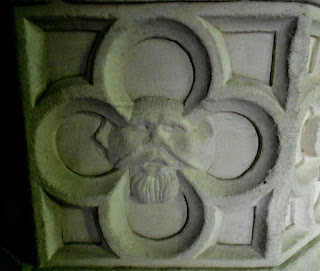 Whilst I was rather intrigued by this tiny, but perfectly formed door I found up near the altar...it covers the 12th century aumbry, but I was charmed by its teeny door knob and keyhole. 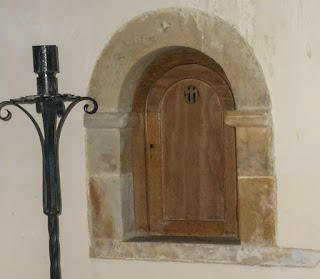 The 15th century brick and timbered priest's house is a rare survivor. There has been talk that it may have served as a pest house at one time and it certainly saw service as almshouses later on. However, it started out as a place for the priest to stay when he travelled up from Sele Priory to collect tithes. In this day and age it's used to host bric-a-brac sales! 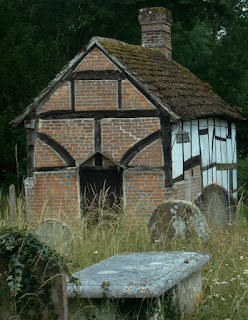 The most noteworthy feature of St Nicolas's though is this magnificent 14th century timber belfry. The entire thing is held together with wooden pegs and there's not a nail in sight. It still has the original medieval steps running up inside it, although they are no longer used. 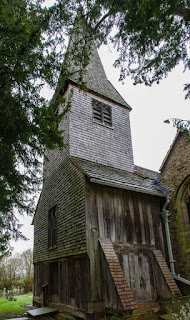 Back in the 1860s some workmen were working on the structure when they discovered a human skull neatly tucked away out of sight on one of the rafters. The story is that it belonged to Sir Henry Maclean who was executed for treason following the Jacobite Rising in 1715. The vicar at the time was a personal friend. Their rather macabre find must have come as a bit of a shock I would imagine!