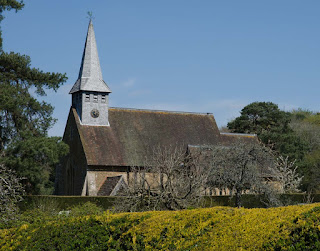 This is St Peter's in Hascombe and looks for all the world like a 13th century church. However, looks can be deceiving. There has indeed been a church on this site since that time, but it had fallen into such a state of disrepair by 1862 that the decision was taken to knock it down and rebuild this one by Henry Woodyer in a nod to the same period in 1864. It's built from the locally quarried Bargate stone.

I hadn't planned to stop, but as went past much to my amazement I noticed it was open...such is the novelty of this that I didn't need to be asked twice. Had you told me beforehand that it was going to be a Victorian/high church combo I'd have definitely not bothered.....fortunately I didn't know that at the time so was completely unprepared for what awaited me......... 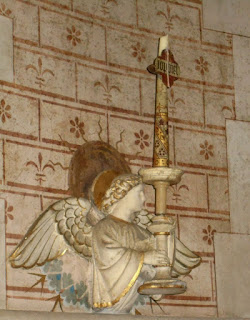 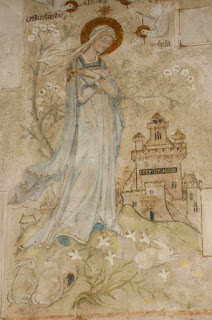 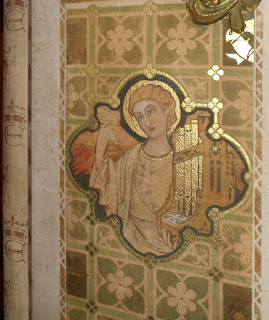 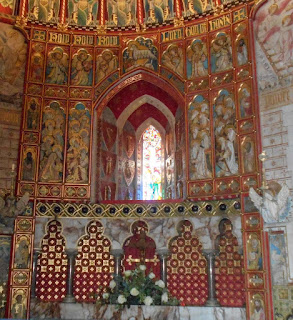 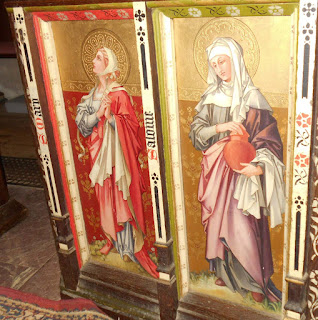 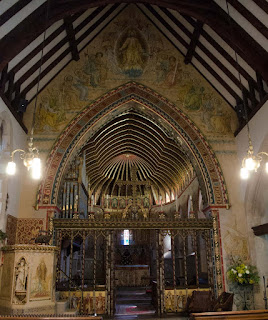 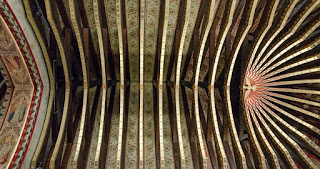 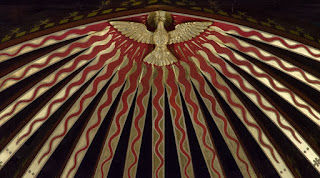 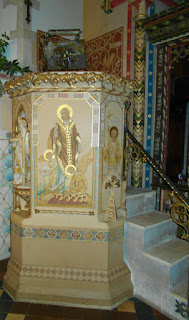 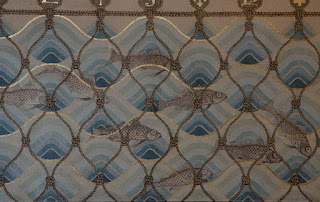 How about OMG. It might be a small parish church in a tiny village, but it punches way above its weight. Absolutely glorious. I was actually lost for words by the beauty and rich colour of the decoration before me. Actually stunned is more accurate...to not have been able to go inside anywhere for so many months and to not be expecting it was physically quite a shock to the system.
Whilst we were there one of the wardens popped in and very kindly gave us a big of background information. It was deliberately designed to not be artistically fixed to any one set period so you see nods to all sorts and many of the wall paintings had a distinct Medieval feel to them in their portrayal. There were originally 153 fish [some have been lost due to a later doorway] on the walls caught in the nets of St Peter. This was because it was believed at the time of the Bible that only 153 species existed. You can tell from the standard of interior that it's been paid for by some very wealthy individuals. It was inspired by the Oxford Movement who wanted to see a return to an older style of faith hence the "catholic" and heavy stress upon the religious symbolism on every available surface. The beliefs of this group [active in the mid Victorian era] was known as Tractarianism after the tracts they published 1833-40 and eventually it evolved into what we now call Anglo Catholicism.
This was my personal favourite [worth double clicking to see the details] as I could see it was a dragon. As is oft the case once I got home the photos reveal more than you see at the time. Not the normal St George and the dragon, but a magnificent 7 headed beast with each showing a very different expression. The rather boss eyed one at the front tickled me. I had no idea what this was about only that I had never encountered it before. Since them some kind soul has confirmed that it's from Revelations, but I'll just continue to enjoy it as a rather wonderful piece of art.

This church keeps itself well under the radar as I haven't seen any mention made of it on suggested places to visit in the county. Am so delighted that we stumbled across it completely by accident. What a little secret treasure.
Arilx
at April 29, 2021