We hopped over to Surrey earlier this month for another walk/explore of an area that's within half an hour of home, but not very familiar to us. This time we were starting from Brockham [near to Dorking]. The village is known for its massive November bonfire and we've danced there on occasion on the following day when it's traditional for all the sides to throw their broken wooden sticks onto the smouldering embers and more importantly imbibe a celebratory ale. Obviously there was none of that type of shenanigans going on this time....one needs to behave properly when one is in Surrey unlike its unruly Sussex neighbour😀 I didn't commit any nuisance on the bridge whilst I was there!! 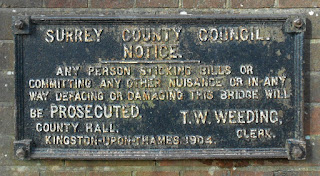 Brockham is very picturesque [and busy with visitors in the warmer months] It's all set round the large green with the village pump at the centre. This was built in memory of a local landowner and worthy called Henry Thomas Hope [more of him later] and is kept well maintained by the Brockham Bonfire Society. Unusually for this part of the world it's still able to support two pubs...one has a rather fabulously named restaurant called "The Grumpy Mole"! 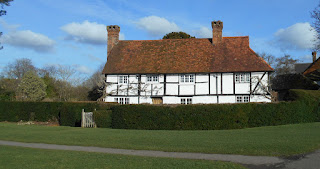 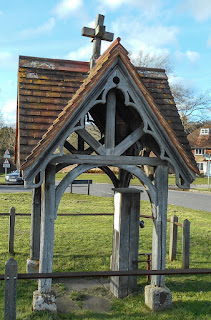 Leaving the village behind us we were soon amongst the trees..there were some fabulous examples to admire on our way round. 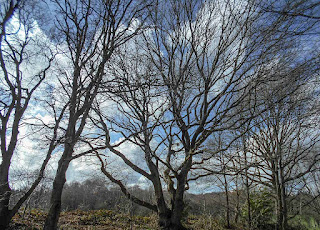 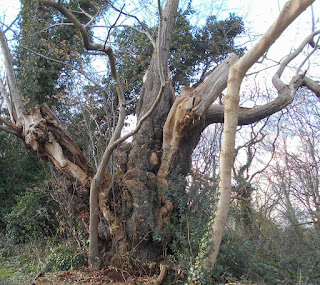 As you know it's my life's mission to provide you with examples of great English eccentricity....even I couldn't have predicted this one though lurking behind the fence surrounding the angling pond of the fishing club....there were a whole series of these gun toting figures all round the edge, but the others were too far away for me to see. Why? Your guess is as good as mine!! 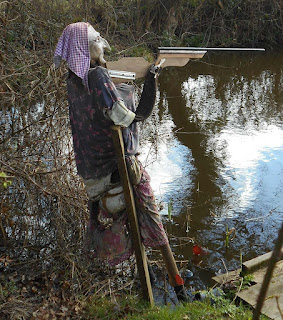 Neither can I explain the orange and blue cow in one property's back garden...probably bought after one of the themed animal fundraisers which have been done all over the place. We had an elephant trail here which I featured in a post some years ago. 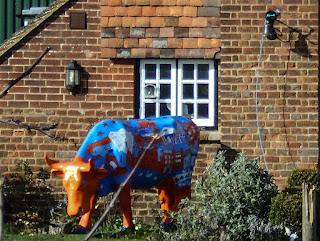 We were right in the middle of the North Downs here. Probably the most well known is Box Hill....during the 2012 Olympics a lot of the cycling was done on the roads around there. It's another one that gets rammed at weekends so we tend to give it a wide berth then. You get some great views from it though and it has some good NT tracks round it.

This though was my starting point for choosing this particular walk...the ruins of Betchworth Castle. It was fenced off from the public, but I was pleased to find out that this is no longer the case. Although it calls itself a castle, it was actually a fortified manor and Edward I is recorded as having spent the night here on 14th May 1294 [he stayed on a local farm just outside Horsham the next night] on his way down to Chichester. The then owner John Berewyk was a close friend of his. By 1570 much of the building had been remodelled and added to to reflect Elizabethan taste and it's this phase you're looking at. In 1835 Henry Thomas Hope [he of the Brockham pump fame] bought it and deliberately made it into a romantic ruin. It remained in this state until a local historian, Martin Higgins, bought it from the council in 2011 for £1. He's seen that the remains have been shored up and repaired. Now the plan is to set up a charitable trust so that the site can be preserved for the local residents. If you do go it's free entry and if you time it right perhaps you'll encounter the ghost wringing his hands...he's supposedly a former owner who fatally ran his sword through his own son believing him to be the escaped criminal he was chasing. Don't hang around though if the black dog appears for he's an omen of death. Don't say I haven't warned you! 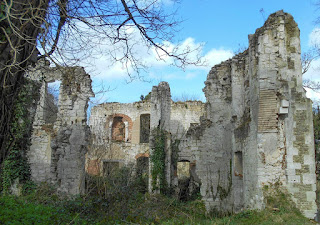