You know sometimes you have bits and bobs to impart, but none of it is going to knit together properly. Usually I can order things, but this particular bundle of snippets has had me defeated so here it instead in all of its jumbly tangle.

Firstly a little update to the post here https://gnatbottomedtowers.blogspot.com/2022/02/falling-back-on-familiar.html. I'd found this gorgeous door in our parish church tucked away in a corner near the altar. Judging by all the wonky metalwork I had reached the conclusion that it must have some considerable age to it. A lady has now confirmed that it's the oldest door in the church and that once it led to the Lollard's Tower where Lollards or protestants as we would now call them were imprisoned whilst the church investigated where they had got their illegal Bibles from. This ceased under the reign of Henry VIII and the break with Rome. Apparently the key to it is pretty hefty and could do some serious damage. Nowadays the space is used as the vestry.

Even in my weird little world it's not every day that a friend texts you to say that you need to be careful when opening your front door because she's popped an envelope through of fragile 40 million year old fossils. Witchywoo had spent four hours with another friend finding these tiny little treasures on the beach. The triangular one is a shark's tooth. My friends give/lend me such interesting things. Another one has sent the current issue of the Fortean Times back via Mr GBT for me to borrow and have a read through. 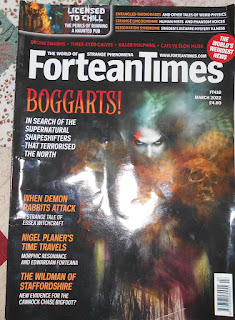 Finally, for anyone who was a fan of the TV programme TimeTeam back in the day many of the original members have reunited and a new episode was put out on their "Time Team Official" youtube channel last weekend. It's got different presenters, but it's more of a return to the format of the earlier series and felt like putting on a pair of old comfy slippers. I find it very soothing and really am delighted to see its return after 10 years. It's being funded by Patreon members so there will only be a few digs and episodes released per year. It's free to view.
Have a great weekend.
Arilx