🐉🐲 Sometimes strange little things happen which surprise me. The type of FB groups I'm in are full of all those weird and wonderful things of which I'm so partial to and this week was no exception. Somebody posted a photo of four huge dragon heads which now sit in the grounds of Wallington Hall in Northumberland. Originally they were part of the London Wall, but were removed when the gate they were on became too narrow to handle the traffic. Incredibly they ended up being used as ballast in a coal ship on its return journey to Newcastle from London. Their subsequent history can be read here https://www.nationaltrust.org.uk/features/dragons-that-fell-prey-to-londons-traffic  All very straighforward so far.
Having never heard of these carvings, Mr GBT mentioned a few minutes later that he'd left a book on the table for me. His friend who he'd spent the afternoon with had been clearing her shelves and she thought that this particular tome had my name all over it [can't think why😁] 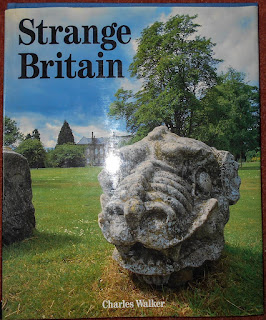 I've never seen this before either, but there on the front cover is one of the very same dragons. Slightly spooky🐉🐲 Sometimes life really does move in mysterious ways. It goes without saying that I am delighted by this unexpected gift.
Have a great weekend!
Arilx
at March 04, 2022