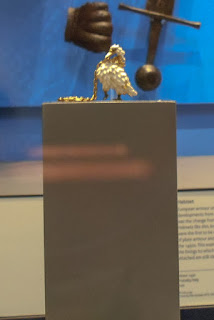 Firstly apologies for the lousy photo....my poor little camera really struggles with glass, no flash and something that really is no bigger than a thimble, so this is the best I could do. That aside this is the Dunstable Swan Jewel which was found in the grounds of a former Dominican priory in 1965.
It's a gorgeous little brooch made from gold and enamel with a gold crown round its neck attached to a chain with a ring on the other end. This type of collar is known as "gorged" apparently when it's seen in heraldry. This tiny little piece is either English or French and dates to the 14th century. Nothing is known about it for sure, but the swan may well be showing allegiance to either the de Bohun family or the House of Lancaster. It's known that Henry IV adopted it as his symbol when he married Mary de Bohun in 1380.
Of even greater interest to me is the keenness some knights showed to prove their familial connection to the legendary Swan Knight who purported to be one of King Arthur's knights no less! Godfrey of Bouillon was one such knight. He had fought in the First Crusade and claimed to be the grandson of this mysterious character. The story was that the Swan Knight had saved the Duchess of Bouillon from the usurper Renier, Duke of Saxony...he arrived to achieve this feat in an enchanted boat drawn by a chained swan. Having only recently read about this Medieval fantasy it seemed the perfect opportunity to pop up and see it for myself on my most recent visit to the British Museum.
Arilx
at March 09, 2022