"It'll only take you five minutes to walk from Tottenham Court Road tube station to get to the British Museum" said Mr GBT confidently when we were discussing the route before my most recent meet-up with my blogging chum Lovely Grey. What he hadn't factored in was how easily distracted I am and disorientated if greeted by a choice of station exits....in the end I chose one, but not the right one. Thank goodness for that kind young man in the shoeshop who kindly sent me off again in the right direction once I'd realised that I was probably not going the right way! However, all was not lost....there's not a dull inch of street in that part of London.

A couple of years ago I began to notice that some of the tube stations have interesting features and if I'm not dashing through I endeavour to have a look. You can't really miss the offerings from Tottenham....the whole place is festooned with these colourful mosaics by Eduardo Palozzi. It wasn't a name I was familiar with, but I've since discovered that I have seen a piece of his work on a previous trip with LG. The huge "Newton" outside the British Library is also one of his. 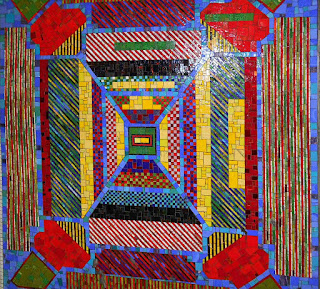 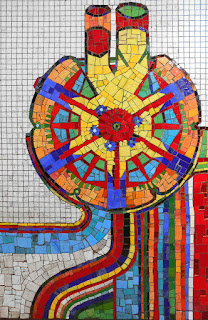 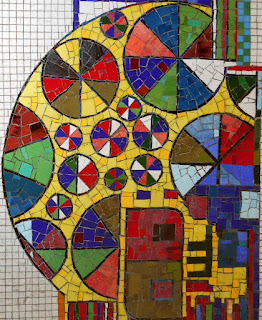 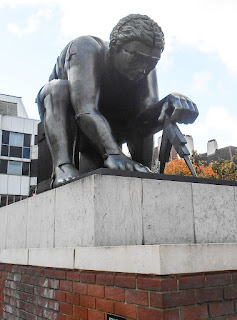 The Flying Horse is the last pub standing on Oxford Street [at this point I should never have been on Oxford Street in the first place!]. This building dates fronm1892, but the earlier one on the same site had been there since at least 1780 and sits on top of the St Giles Crossroads. Until 15th century it was where the gallows were and infamous for being the place where the plague started in 1665. Perhaps it was fortituous for some that St Giles was the patron saint for sudden misery amongst other afflictions like leprosy. 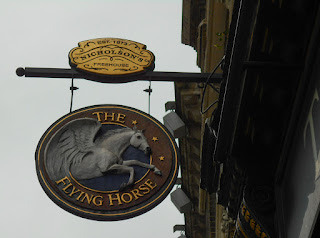 Whilst out freely roaming [it sounds more classy than "not having a bleeding clue where I was" somehow!] I did the classic touristy thing of seeing the Elizabeth's Tower or Big Ben as we all like to call it still. I know BB is the bell really, but I hadn't appreciated that the tower had even been renamed to celebrate the Queen's Diamond Jubilee back in 2012. Anyway I didn't see the real thing [I hadn't strayed quite that far!], but this questionable 3' souvenir version. I left it there for somebody else to take home as a reminder of their holiday😆

Having thoroughly and unashamedly mangled Dr Johnson's famous quote to suit my own ends this plaque has a connection to the good man who wrote the dictionary. Topham Beauclark [described as a dandy and a wit] was a close personal friend of his.  His wife was originally a Lady Diana Spencer and known as Lady Di before she married for the first time to the unfaithful 2nd Viscount of Bolingbroke. She gave him a taste of is own medicine when she left him and continued her clandestine affair with Topham. Having been divorced by the Viscount on the grounds of her adultery she married Beauclerk, but it seems that this partnership was no happier. She had been the Lady of the Bedchamber to Queen Charlotte earlier in her life and following her widowhood she managed to successfully pursue a career as an artist which would have been very difficult for a woman to achieve at that time. I am assuming Dr Johnson wasn't her greatest fan as he's on record as calling her a whore. Charming! 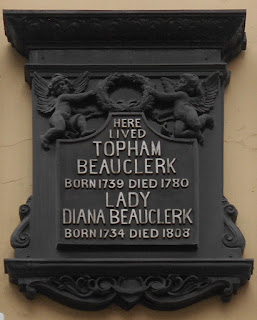