Every once in a while I visit a place and find that it really resonates with me on a personal level- this, I find, doesn't always happen perhaps where I might expect it. When I went up The Tor a few years ago I actually found it quite disturbing and despite the amazing views, was quite relieved to begin my descent yet I loved the gentle energy of Chalice Well. Who knows on another day when I return I might find it very different up there.

One place that took me a long while to get around to visiting was St Nectan's Glen in Cornwall. One particular friend has already been and recommended it as being a place I'd love. I finally got there in 2004 and she was spot on. Just stunning. There's a winding walk through ancient woodland down from the car park along the valley running alongside the banks of the River Trevillet with regular fairy stacks that people have built from the stones as they pass through. 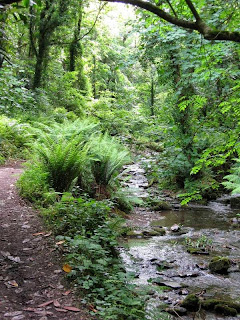 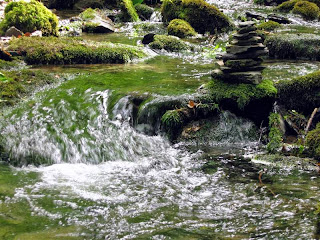 The unspoilt beauty of the waterfall speaks for itself- it is incredibly tranquil and from the number of clooties hanging in the surrounding trees and other devotions it speaks to many. 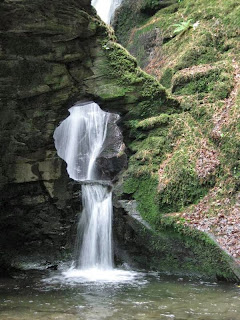 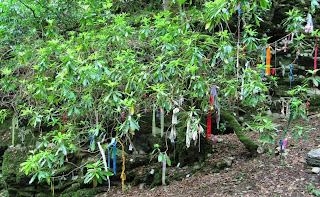 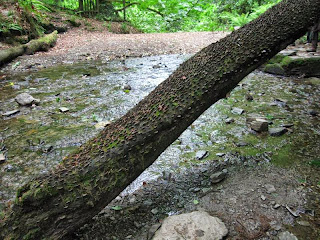 The legend goes that the sixth century St Nectan's hermitage was above the waterfall and that he rang a silver bell in stormy weather to warn ships of the perils of the rocks at the mouth of the Rocky Valley. Many people report strange sightings and certainly some of our photos developed strange orbs which seems to be quite a  common placed experience.

When we last visited in 2011, sadly due to a personal bereavement, the owner had put it up for sale and it looked like it might pass into private hands. However, I am pleased to see that it was sold last year and that the current owner had been a frequent visitor in the past. He has pledged to keep it open to the public and only make improvements to the site that will enhance it rather than detract from it. More info is here
http://www.st-nectansglen.co.uk