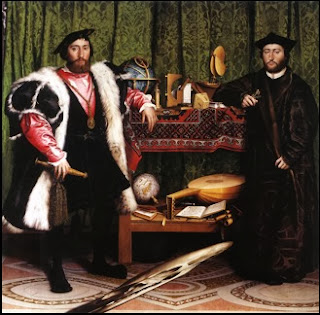 A well known painting by Holbein which will be familiar to many. I wanted to write about it a few months back but couldn't for the life of me remember either who it was by or what it was called. Honestly there's no hope for some and even less for others! Thankfully it's mentioned in my current book so I have been reminded- I've got no excuse really as I saw the magnificent original in the National Gallery last year!

It was painted in 1533 in the tradition of learned men with books and instruments and in this case shows Jean de Dinteville, the French ambassador to England on the left and his friend Georges de Selve, Bishop of Lavaur who acted as ambassador to the Emperor, The Venetian Republic and the Holy See. The pair were over on a secret mission against the background of Henry VIII's annulment of his marriage to Katherine of Aragon and his excommunication from Rome.

The painting can be read as a reflection of this religious discord by interpreting the depicted items as being laden with symbolism. The lute, usually thought to represent harmony, has a broken string which may signify the breakdown in the religious relationship between and within different nations as change swept in and the presence of the Lutheran hymn book could be seen as a plea for harmony to be restored. In the top left hand corner behind the curtain just a fraction of Christ on the Cross is visible- this may represent the division of the Church or any of the other multitude of theories arguing Holbein's true intention.

Without doubt The Ambassadors is most well known for its extraordinary skull [ a symbol of human mortality].This distorted projection is an example of anamorphis where the viewer is required either to use a special device or be at a specific vantage point for the image to be revealed. In this particular instance you need to approach the painting from the right to see it. I actually donned my bossy boots and walked my chums back past it so its secret could be unmasked! 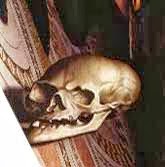