When I was at infants school bringing in nature related items including dead insects was a regular occurrence-we all crowded around and were fascinated by the latest treasure-this was how I saw my first ever dragon fly and stag beetle. They were displayed with great pride on the nature table along with leaves, birds nests, acorns etc for all to admire. I hope it still happens but I do wonder....

The stag beetle is our largest native ground dwelling beetle with the male reaching anything up to 7cm in length. Amazingly despite this they can fly- the females can as well but rarely do. As with many species, sadly they are endangered. They are a real asset to the gardener because they eat rotting wood and return the minerals to the earth. At various times they have been known as billywitches, oak-ox, thunderbeetle and horse pincher.

They feature in British folklore as it was believed they could summon thunder and lightning. Medieval peasants thought they flew around with hot coals in their jaws setting fire to buildings. It was deemed to be good luck if you carried a stag beetle's head in your pocket.

Our local nature reserve is doing its bit to help preserve this very fine beetle with its own purpose built loggery. The carving stands in front of it. 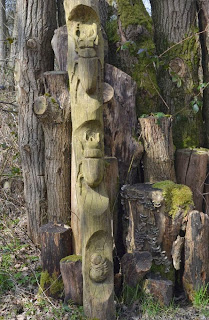 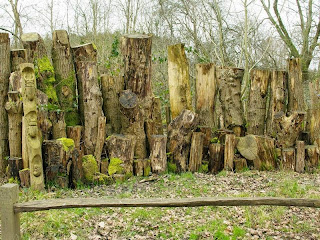