This week upon matters of selfies and puffs or maybe in this particular instance puffed up selfies....it's ok you're safe no selfies from me....no camera on my phone [can you tell my phone went out with the square wheel!] and besides, my face immediately contorts itself into one of my many gargoyle expressions the minute I am aware of having my photo taken....nope this is to what I refer! 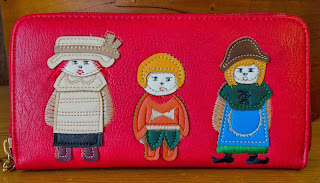 This is the Gert, The Gnat Bottomed Purse, who has been on my case ever since I started the frugal bit as she feels she should be the star of the show as keeper of the money. She's the one on the left with the red hair- not natural I hasten to add, a while back it was a rather startling shocking pink. She is erm quite a force let's just say- she sounds like a sarf London used car dealer and is rather trappy to say the least although she has a heart of gold. She guards her money like a dragon with its hoard and wails like a banshee every time I attempt to extract some- you may have heard her?! This gives you some idea


For many years she was married to Big Bill but he's now gone to that great cashpoint in the sky but now she is engaged to Stormin' Norman the wallet. She wishes he was more like her hero Arkwright but he is a very easy going fella [he needs to be] and as she doesn't understand the concept of credit cards he's quite happy to release the snitch card [it has wings] for any necessary purchases. Shown with her are one of the purslings [the grandchildren]- they are identical twins and rather naughty. I can't tell whether that's Penny or Prudence and at the far end is her daughter Cashandra who does know about credit cards and gives her owner Spendy Wendy a very hard time. Anyway enough of them.....

Puffs- a frugal filler food. I'm not claiming any nutritional value for them but served with an otherwise healthy meal they are a great way to fill up hollow legged teenagers cheaply. I am not a fan but Mr GBT makes them like his Mum did and she had 6 children to feed. Mix self raising flour with a little water to make a very thick paste and season with salt and pepper [Mr GBT has also added herbs and dried fruit when he's made a sweet version] and then shallow fry big dollops in vegetable oil for 15 minutes turning so that they are golden each side. Serve immediately.