Or to call it by its familiar name the Blue Tit. 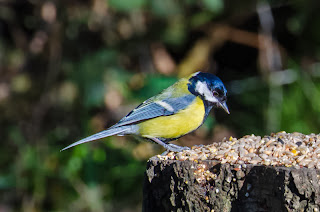 It is the only tit with blue colouring and I think this recent photo taken by Mr GBT at our local nature reserve shows it well.

I was recently lucky enough to be given some back copies of the RSPB magazine which has furnished me with some interesting snippets.

Although every blue tit might look identical to the human eye, the birds themselves are able to recognise each other as individuals.Their blue cap gives off a strong UV signal which tends to be stronger in the males. The brighter the cap the healthier the bird is so is more likely to attract a mate. Interestingly though scientists have discovered that the birds tend to pick a partner with a similar intensity of colour to its own. The other factor a female needs to take into account is how bright a yellow is the male's bib as this shows how good a provider he is- the pigment comes mainly from the caterpillars he eats thus the more consumed the more eye catching his bib and tucker!

This does not work when translated into a potential human breeding partner- anyone with either a tinge of yellow or blue about them does not scream fabulously fit and healthy does it!