A lot of my joblets are on the outskirts of the town where I live which means I am forced to drive through the beautiful Sussex countryside. My mind ambles about whilst I am behind the wheel [I am concentrating on the road at the same time I hasten to add!] and yesterday, seeing all the water in the fields from the recent heavy rains, I wondered what you might see if you went for a walk in the countryside in January. The answer came quick enough as I passed by the hedgerows. This 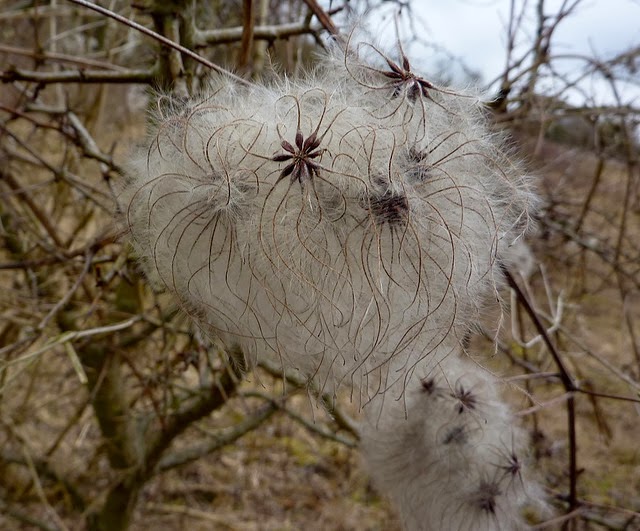 Old Man's Beard or to give it its proper name Clematis Vitalba. Long stretches of its fluffy seedheads putting on a pretty feathery show but largely unnoticed by moi. However, as one of my aims is to celebrate the ordinary, the overlooked, the everyday I've been off for an internet trundle to find out more.....

It's one that has rather mixed associations- on the one hand it is said to do the work of the Devil by the way it trails into other plants and strangles them yet it is also called the Virgin's Bower because of its virginal white appearance. One of its more familiar names is Traveller's Joy but sometimes it is known as Shepherd's Delight, Love Vine and Herbe Aux Gueux [meaning beggar's or rascal's beard]

Southerners named it the Baccy plant after poor country folk would cut its small wood into pieces and smoke it like tobacco. Beggars were known to rub its acrid sap onto their skin to cause ulceration so that they persuade sympathetic passers by of their plight and be given money.

It seems to have been of little medicinal use but it was used in Slovenia to weave baskets for onions and binding crops and used in Stone Age Switzerland for rope.