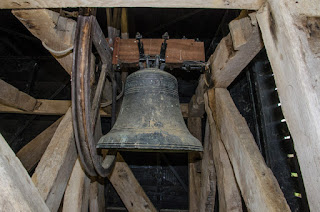 Okey doke confession time...I am married to a campanologist or bell ringer to use the more vernacular term. Mr GBT comes from a family of ringers..his brothers are married to fellow ringers....he himself had a near miss, but that was way before I was on the scene. Myself? Never so much as even touched a sally [bellrope] let alone had a go at the noble art of ringing. I have, however, observed the art in the belfry and I can confirm that it is darned complicated. There is no need to be able to read music but you have to be coordinated and follow a rhythm.  The "tunes" are called methods and vary in the degree of difficulty. All have names e.g Cambridge Surprise Minor and Stedman Triples which is one of the earliest dating from the 17th century.

Having had bells play no part in my life until I met Mr GBT, they have formed the backdrop to my married life. The ringers, some of whom I count amongst my closest friends, rang for us at our wedding and rang a special quarter peal to celebrate the birth of our son. A quarter peal takes 45 minutes to ring and there have to be no mistakes for it to count....if you lose your place or it goes wrong it doesn't count, but for those successfully completed they are recorded in the "Ringing World" which is the official journal. A full peal takes about four times as long and you still can't stop! There are certain days when there is no ringing, particularly during Lent and for funerals or Remembrance Sunday they are rung half muffled which quietens every other blow from each bell.

One thing is definite....most bellringers enjoy a swift ale or three. Drinking and ringing have always been closely associated. In times of yore there were even barrels up in the ringing chamber, but in an attempt to clean up their reputation regional guilds were formed to police and eliminate the riotous behaviour. All ringers still have to be a member of their local guild to this day but it still attracts its maverick element. It is reported [although possibly apocryphal] that one local ringer, Henry Burstow [1826-1926], snapped back at the Rev H.B Ottley "I fetch 'em in, and I leaves you to drive 'em away" after the vicar had criticised him for not bothering to attend the service for which he had just rung! For some it forms a huge part of their lives with whole families involved. There are striking competitions and opportunities to ring all over the country. For others it is largely a social activity. Nowadays Mr GBT is most definitely in the latter category!