That has to be the longest flower name I've ever seen. It's the old Kentish name for what many others will know as Lords and Ladies. 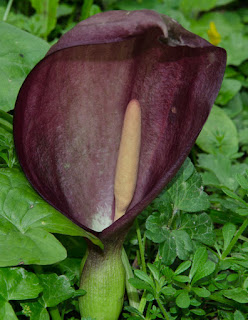 It's a plant which has a plethora of names. Personally I am rather partial to Snakeshead, Devils and Angels, Bobbins, Jack in the Pulpit, Friar's Cowl and Bloody Man's Finger. There are many more.

Most know the berries, although fabulously eye catching and glam, are poisonous, but the root can be eaten provided it's roasted well apparently. In Dorset young girls supposedly believed that by touching it they could become pregnant and legend has it that it can rouse bears from hibernation. Quite how is not clear! The myth that its pollen glows at night gave rise to another of its names "Fairy Lights."

Naturally though it's the resemblance of its spathe and spadis to the male and female genitalia which has caused the most mirth. The most common Cuckoo Pint is referring back to this very idea for pint is an abbreviation of pintle - an old word for penis. Dog's Dibble, Parson's Billycock and Willy Lily are some of the more ribald alternatives.

With hands raised in horror at such wantonness, the rather stuffy Victorians shuffled along in due course on yet another of their moral crusades to sanitise the nation...it was renamed as "Our Lord and Our Lady" with the yarn being spun that the spathe represents the Virgin Mary using her cloak to protect the baby Jesus. I know which version I prefer but I leave it to you to choose.....