The Witch and the Bell

Life is curious sometimes with its odd twists and turns. Recently I have started reading one of the books I received at Christmas. 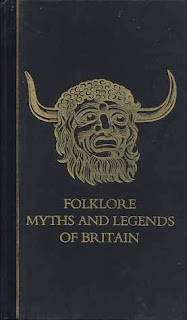 It is proving to be a fascinating if rather weighty [as in heavy on my lap not as in intellectual content] tome with the tiniest writing that I'm sure only a Borrower or a Bright Young Thing with perfect eyesight could cope with for any given length of time. As ever, I am unable to resist peeking further on than the bits I've already completed so was staggered to discover a hither to unknown to me folktale from the small village where Mr GBT rings. Having encountered it last week lo and behold the local paper then featured it this week. I think the themes are familiar and occur in many similar legends around the country but I thought it worth repeating here.

It was said that many years ago a bell rolled from a waggon into a boggy hollow and sunk below the surface. All attempts by the villagers to retrieve it failed so they sought the advice of a local witch who advised that it needed to be pulled from its watery grave by 12 white oxen in silence at midnight. Following her instructions it was near to being mission accomplished until one of the chaps called out in excitement...as you might imagine the chain snapped and the bell disappeared. I can guess who was buying the drinks that night! I'm sure if you've imbibed enough grog you'll still be able to hear it ringing if you listen carefully enough.