I am always taken aback by the difference between the North Downs and South Downs. Living in the Weald [the flat bit in between!] I am equidistant from the two ranges of hills yet am far more familiar with the South Downs...possibly due to having had family living down on the coast we've travelled across them since I was a young child.

The South Downs are chalky and pockmarked with the remains of the Neolithic flint minings. Flint lays easily accessible on the surface but I can only think that there was some sort of sacred ritual attached to the challenge of removing the material from deeper within the earth. The hillsides are dotted with sheep and most of the trees were cut down by our forebears. The view is out to sea.

By contrast the North Downs are quite different in feel. You certainly get the chalk escarpments in places but the area is far more densely wooded with a mixture of coniferous and deciduous. The woodland floor is carpeted with stunning bluebell filled glades and the more open spaces on Leith Hill were being coppiced as we walked past. The foresters make and sell hazel hurdles. 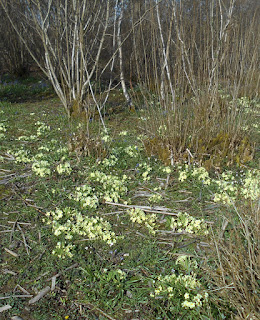 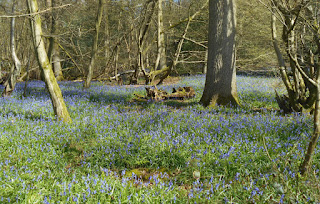 Even the soil is different....clay yes in abundance but there are equally many areas of sandy loam and heathland which support many rare species including the sand lizard, smooth snake and natterjack toad. 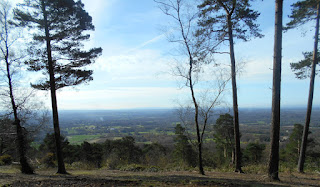 The views look inland and from Leith Hill Tower [the second highest point in the South East] you can see across to many counties on a clear day. Wembley Stadium stands out prominently on the skyline. The tower was built by Richard Hull in 1765-6 and was intended to be used by his visitors [he lived at the recently reopened Leith Hill Place- also the former home of Vaughan-Williams] for admiring the scenery [telescopes were provided]. At his request he was buried beneath it in 1772. Nowadays you can climb it if you've got an NT card and the kiosk below serves a mighty fine range of edible goodies. 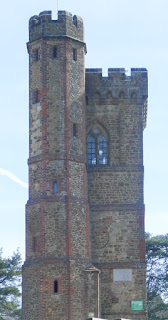 A rather splendid spot to while away a morning I find!