Growing up in the late 1970s I was very familiar with people talking about being "on the dole" as they received money to support them whilst they looked for work. The slang term for unemployment benefit originates from at least 1919 when money was "doled out" to those in need.

The concept of a dole [monetary or otherwise] being given to those in need dates back much further to the Middle Ages. Many were left as charitable bequests in wills and whilst many have fallen by the wayside, some are still observed. The Biddenden Dole reputedly dates back to the 11th century and was granted by Eliza and Mary Chulkhurst who were co joined twins. They died within hours of each other and left their lands to the church to support the dole. This takes the form of biscuits with a representation of the twins on each one along with tea, cheese and bread which are distributed to the elderly every Easter.

This is the Hospital of St Cross in Winchester. 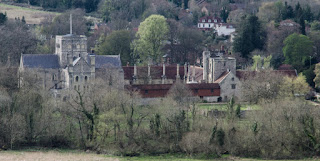 It too is famous for its Wayfarer's Dole. Anyone who asks at the Porter's Lodge will be given a small cup of beer and a piece of bread. In my excitement I forgot to ask but my brother-in-law did. He gave a good report of the ale so we both thought it wise to invest in a bottle for memory's sake!

We saw many wonders on our visit - report to follow!