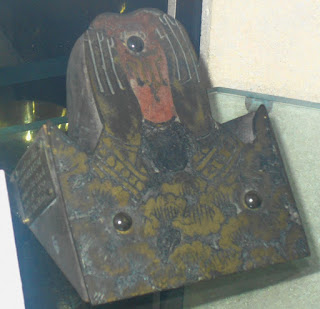 I happened across this fragment of something I didn't recognise recently and was intrigued to read that it is part of a late medieval heart burial. In times of warfare or trauma related death I can understand that partial burial may occur if you do not have a complete cadaver, but a heart burial is apparently something quite different.

Scurrying off to see what the internet had to say on the matter I now know that this was quite the fashion, particularly in the times of the Crusades. Knights often died abroad and it would have been very difficult to transport a whole corpse home. Instead the heart was embalmed in spices and returned to the loved ones in a lead or ivory box for interring here. One of the most famous is that of Richard I in 1199 whose heart in buried in Rouen Cathedral. It was examined in 2012 and found to have been preserved in frankincense [traces of other materials remained too]. For those who might like to see this for themselves  St Michael's church in Exning, Norfolk has a rare double heart example.