A Romanesque style of decoration upon the chancel arch in St Mary Magdalene's in the tiny hamlet of Tortington in West Sussex. These strange fantastical beasts biting down upon the stonework are not very common and tend to be concentrated in certain areas only. It's thought that they were probably painted when they were first carved. Over time I've been lucky enough to see a few examples around the country, but they've all been a repeating pattern. It was the first of my little Mother's Day treats to discover that not only has West Sussex got some of its own, but each one is different. This only came to light when we were taking a closer look at the photos last night. It is thought that they may have been intended to terrify the congregation or perhaps they were there to amuse the kiddies when the sermon went on too long. We shall never know, but I've popped up a couple of close up shots with a little more detail. 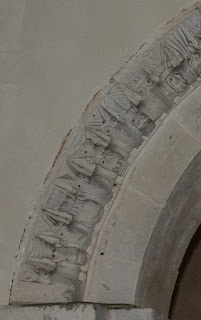 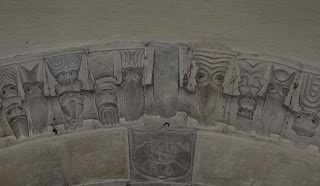 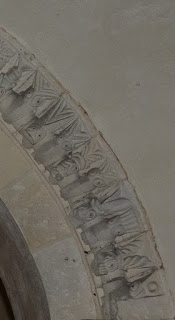 A bit of Norman madness!