Let's drink to that! 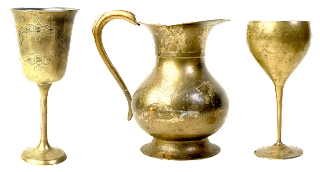 So there I was on Tuesday quietly finishing my cup of Vanilla Chai [I should point out that I was a virgin chai drinker before then], replete after demolishing a very decadent cream tea with Mr GBT and people watching unobtrusively. For those of a less gnat bottomed disposition than moi there was an additional option of having a glass of champagne and half of the group nearest to us had chosen to do so. As they clinked their glasses and said "cheers" suddenly my brain stepped up a gear and asked why do we that and how did we learn it? Well that's it I need answers now!

Except...nobody really knows. The practice seems to have started with the Greek and Roman cultures as they raised their drinking vessels to their Gods before the celebrations could commence. Cheer is Latin in origin and meant any sort of facial expression at the outset. Since the 18th century it's morphed into the familiar "gladness". Less frequently heard is "chin chin" which comes from the Italian "cin cin" and has the same intention. As to "Bottoms Up" theories abound. Whatever your take is on it the motivation was to get you to start drinking and thereby show the bottom of your glass to the company you were keeping. One idea is that it came from the English sailors being conned into service by way of a coin based bribe. The coin would be placed in the bottom of their glass of beer and to prevent this the drinkers would use the phrase to check whether any of the beers had been tampered with in this way.

Proposing a toast may be to do with placing a piece of actual bread in the oft acidic tasting Elizabethan wine to improve its poor quality or flavouring it with spiced toast in the 17th century. As for the clinking sound, beyond creating a sense of unity and bonding, you may well be echoing the medieval idea of driving away malevolent spirits with the sound.

Whereever the truth may lie I'm happy to raise a glass. Cheers!!