Weekend forays outdoors at this time of year tend to be of the spontaneous local variety...if sunshine is promised all chores are suspended for a couple of hours and we're off out of the door. Making new discoveries on our patch is good for the soul as far as I'm concerned and a recent return trip to Buchan Park reinforced this belief.

My primary reason behind this particular choice of destination was to see the latest carving by Janine Creaye who I featured last month. I make no secret of the fact that I absolutely love her interpretation of our land's beautiful nature and spirits. This piece of work was paid for by the Friends of the park and is dedicated to Robin who is the former senior ranger.

This nest like structure swinging from one the silver birches I passed left me puzzling as to what on earth it could be. I now know it to be a type of gall called Witch's Broom. It gets its name from the belief that it was caused by the witches flying over the tree, but in reality it's triggered by a fungus. The tree then produces a mass of growth from one point and they are known to be used as nests by some bigger species. 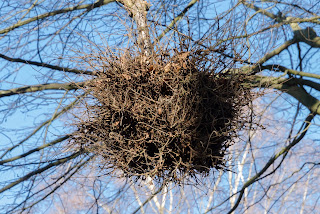 As for this fellow....well he had me completely foxed. All I could say for sure was that I hadn't seen one before. Believe you me I'm no birder, but eventually with my fabulous powers of observation [not] I eventually noticed that that right next to the normal identification charts there was one with just the marsh and willow tits on it. Aah so it'll be one of them then! However, the differences between the two species are minimal and you really need to know your onions to be able to accurately tell them apart. This particular avian chap wasn't in the mood for hanging around for a selfie....this was the best of the lot...most of the images are of an empty feeder where he's just flown off or out of focus tail feathers as he makes a speedy exit. Not one to give in that easily though I put it out there on an appropriate FB group and I'm reliably informed that it's a marsh tit. 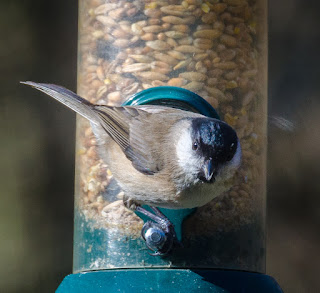 A couple of hours spent well and still got all the gruntwork done on my return to GBT!