The Atlas Obscura site has turned out to be a great weapon in my arsenal for doing a quick online recce of anywhere I'm thinking of possibly visiting. It's a recent find and gave me some good leads. By far and away though my favoured approach is just to wander and see what turns up. That way I can take a picture of all sorts and then have the enjoyment of researching when I get home. As ever a random selection from Liverpool. It was a bone chilling cold day so we didn't tarry!

Just to prove that on occasion I do stay on piste and behave like a proper tourist here's the photographic evidence. The Three Graces....one of the most iconic views of the city. Blue skies, but it had been snowing a matter of minutes earlier!

This fish tail shaped piece of metalwork is actually one of a thousand milestones funded by the Royal Bank of Scotland and is part of the National Cycle Network. It's covered in all manner of marine details. 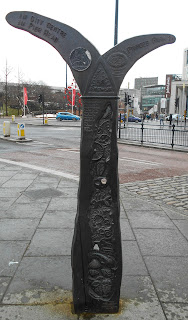 Liverpool is twinned with Shanghai and as a mark of the good relationship they share this Chinese Gate was shipped over in pieces in 2000. It has 200 dragons and is the biggest example outside of China itself. All the street signs in the district are bilingual. 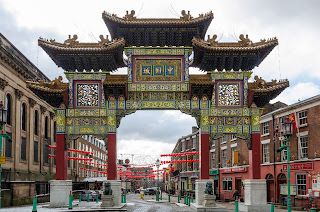 Variations of this odd canine shaped "thing" pop up all over the place....except it's not a dog, but that oh so common combination of a lamb and banana. Yes you read that right! The original yellow one now stands outside the university and is the work of Taro Chieze. Its official title is Superlambana and it is a comment upon genetic engineering. This example features Liverpool bands including one of my favourites as a student....Echo and the Bunnymen. 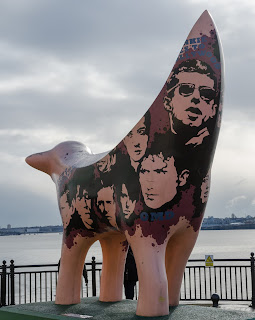 Some of the sights moved me greatly. This WWII memorial is to the Merchant Navy seamen who lost their lives and "have no grave but the sea" [the globes are in closeup] or this, St Luke's which is more commonly simply called "The Bombed Out Church" It was a victim of the Liverpool Blitz in May 1941 and the decision was taken to leave it as a ruin. It stands in memorial of the victims and as a place of peace. 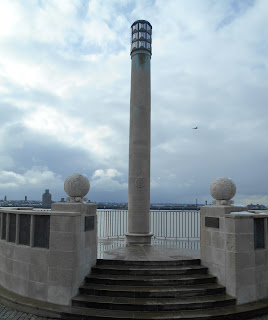 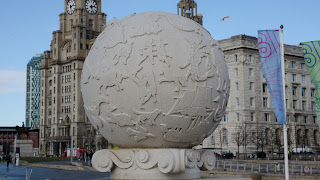 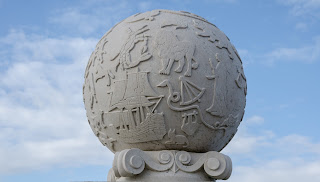 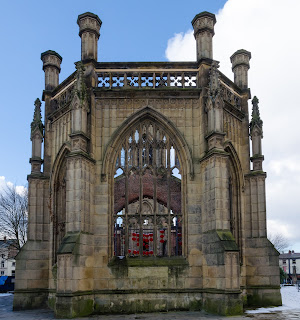 Down at the Pier Head there is a plethora of sculptures to view. To keep the content shorter I've picked out "Telescope" by the artist Ell Brown. It commemorates the work of the 17th century astronomer Jeremiah Horrocks who came from Toxeth. He is noted for being the first to describe the transit of Venus [so Google tells me!]. I am intrigued to know why the orrery has a cherub on it...alas so many questions without answers! 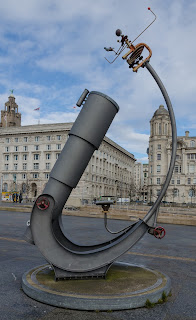 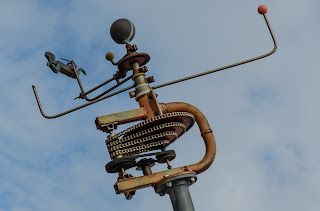 This one was a swine to photograph...I had to lean at a jaunty angle with my camera lens pushed right up to the fence to get a view....it was the best I could manage, but worth the effort for the Dazzle Ship methinks. Originally the Edmund Gardner Pilot ship sported a more conventional black and white livery. However, these jazzy colours are a temporary homage to the Dazzle painting technique used in WWI. The theory was that effect would break up the shape of our warships and obscure their movement in the water from enemy submarines. If camouflage was the name of the game I'm guessing the palette of choice would have rather more subtle rather than the current ones which put me in mind of the Bob Marley rasta hats! 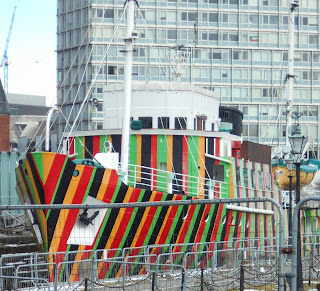 Finally how about a piece of evolving public art...there is something rather touching about the padlocks or Lovelocks as they're known decorating the fences. People continue to add them as a  personal mark of their love for the special souls in their lives. This simple act seemed very touching even to an unromantic bod like me! 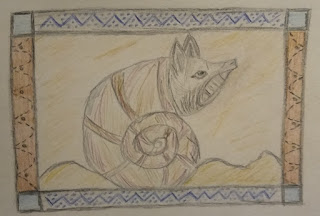