....is a corner off the beaten track where it feels as if time has stood still. Another age when the mysteries of the natural world were still closely intertwined with the teachings of the Church. The Old Religion and New Religion walking side by side.  It's a place where I can imagine villagers leaving "thanks offerings" at the feet of the now unknown painted female saint in the local church. Perhaps she is indeed St Margaret of Scotland or St Margaret of Antioch, patron saint of childbirth. If I was with child I know where I'd be leaving my money. 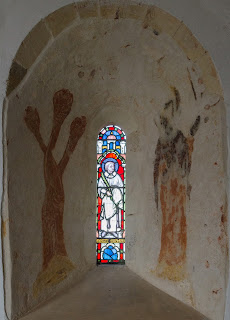 Still today votive offerings are left at the Shrine of Our Lady in memory of loved ones. Flowers and even potatoes on occasion! It may be a later addition to the landscape [it is in memory of a local lady's Mother] it has gathered a mystique all of its own within the setting of the dark woodland grove and the "bottomless" Madonna Pond. 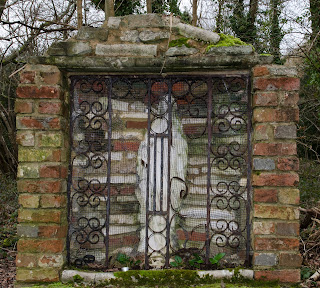 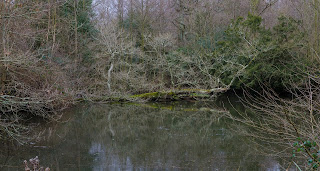 Down a mud filled track you can only approach on foot . The sudden atmospheric change in light levels makes the tales of the coach and horses disappearing into the pond, never to be seen again and glimpses of the Beast of Binsted in your peripheral vision suddenly seem very possible. Within the last twenty years a tin containing broken china and surrounded by paper wound round nails was unearthed by a metal detectorist. Later investigation found there to be a curse written on the scraps...one the originator never intended to be found. It's a sacred site for many seen and unseen. 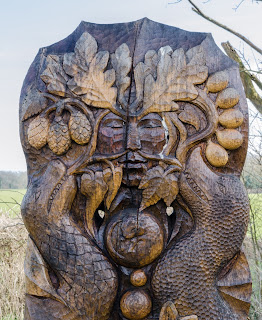 Danger lurks at the nearby knucker hole too for this is the watery lair of the serpent-like nicor. These reptilian dragons will bide their time silently before launching a deadly attack on any unsuspecting victims who venture too close to the water's edge. Beware!

We're in the small parish of Binsted here...an area unfamiliar to me, but with the promise of a rich folkloric seam to be mined it was my destination of choice on Mothering Sunday. Sadly this beautiful place is under serious threat from a redevelopment of the A27. The final decision is awaited.