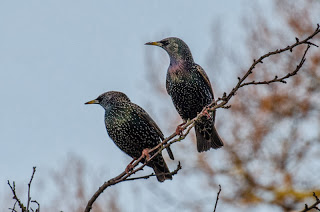 In a bid to increase the number of avian visitors to my feeders I've been tweaking what's on offer. A switch to a daily top up of dried meal worms has brought a flock of anything up to twenty starlings in one go.

The official collective noun for these beautiful birds is a murmuration, but frankly they rock up like a load of noisy teens squabbling and pushing each other out of the way and I think a "quarrel", as for sparrows, would be hugely more appropriate. I can hear them shouting at me to get a wriggle on above my head as they line up on the aerial and the moment I'm back indoors down they swoop. Most of the time they're so busy arguing and chucking the stuff on the floor I can't think the ones on the table get much....the ones lower down the pecking order who have to wait their turn on the ground meanwhile quietly tidy away the mess the others have made.

I might be completely wrong here, but starlings strike me as anything but bird brained [in relative terms]. One has got the measure of the situation....it suddenly flaps its wings which causes disarray amongst its feathered companions and sensing imminent danger, they scatter to the four winds in a panic. Meanwhile the perpetrator sits tight....mission accomplished and it gets to feast on the goodies without interruption! Humphrey watches this daily spectacle through the safety of his cat flap....I think he reckons those long, pointy beaks could do him some serious damage if he took one of them on!