...beholder apparently if this photo is anything to go by. A working pair of scissors on a human eyelash no less! 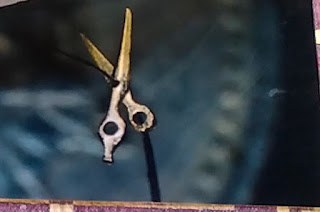 For the first time ever I met one of those amazing people who are literally able to create unimaginably tiny works of art within the eye of a needle. Micro sculptor, Adrian Thompson, brought some examples of his work for all of us to be amazed by last weekend. If you attend a miniatures show you're going to have an exceptionally appreciative audience who understand just what an extraordinary feat this is. Under a series of microscopes [I could barely even see the gold needles with the naked eye] the wonder was revealed....one of these Chinese cats which actually waved its paw just like its much bigger counterparts.... 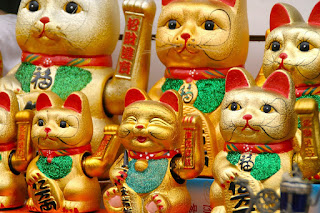 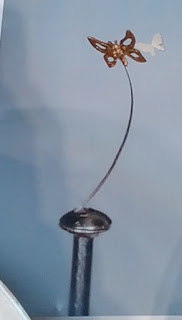 Aston Martin and 007 insignia. That's a match stick in the foreground for scale! 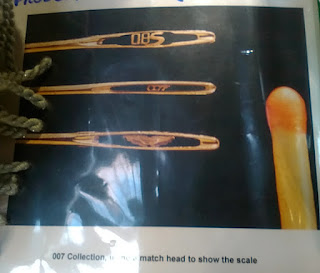 I had a brief chat with Adrian to ask him how he started and he said that after he'd had a gold tooth fall out he decided to sculpt it into an angel. Enquiring whether he ever sold any of this pieces he admitted that he had done reluctantly on occasion, but he preferred not to because it means he has to make another one to replace it. One lady asked the price and she presumably decided it was beyond her budget after he told her it would be £15000. I can well believe it! What an unexpected treat to see these marvels for myself!