Down here in Sussex we have Cosham [pronounced Cosh-am] and not many miles away Bosham....pronounced Bozzum. Makes perfect sense doesn't it! There are two things I know about Bosham. Firstly it's stuffed nose to tail with tourists in the summer and secondly it floods regularly because the sea comes up and over. You need to know the tide times before you visit! It's a quaint little place to while away a morning.

This is along the High Street. You can see how high the doorsteps are to stop the water coming in! 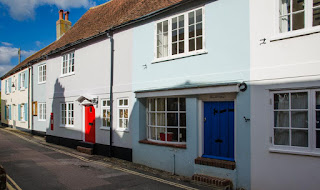 The view out over the estuary with the village behind us. The little egret was nosing about for quite some time. The sign is on the road where we were standing a couple of hours earlier to take the photos! 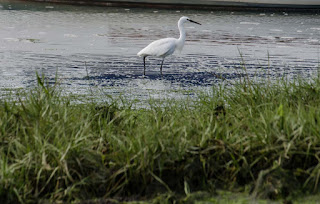 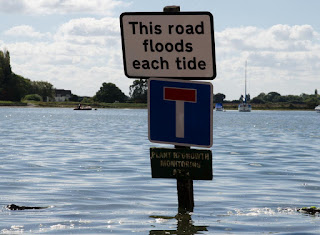 Bosham has several historical claims to fame. In 1064 Harold visited prior to sailing to France to meet William the then Duke of Normandy or to us William The Conqueror. The church is featured on the Bayeux Tapestry. 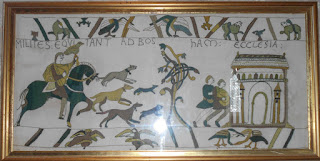 This is Quay Green where King Canute [or Cnut] supposedly tried to hold back the waves. It's said that his daughter drowned in the Mill Stream running behind the church and she's buried inside allegedly. There is definitely a grave below her memorial stone, but its provenance is unproven. 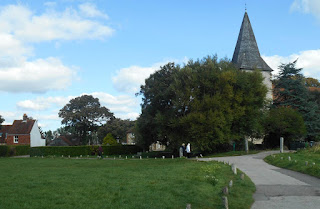 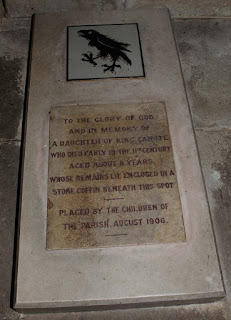 Obviously, being Aril, a visit to the church was in order. This gravestone [I had read about it] is very prominent. I was initially rather confused about why it had a boat on it yet the cause of death talked about the deceased falling from a horse and drowning. I now know that a horse was something seamen stood on to help them unfurl the sails. 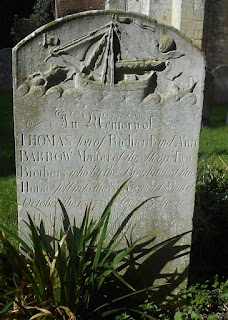 This Flemish roundel originally came from Norwich Cathedral [there are four of them, but only one shown as don't want to test your patience too far!]. Yet again I was puzzled....an angel holding a hammer? Is it off to do a spot of DIY then?!  Apparently it's one of the implements of Christ's Passion [the others are pincers, a spear and a scourge if you're interested]. Always something to learn. 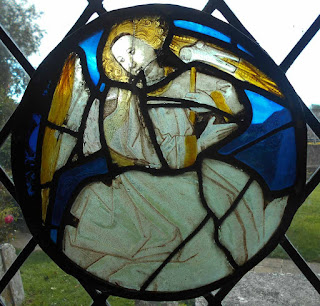 How about these natty little figures round the bottom of one of the columns then? I can see now I will have to add some new expressions to my gargoyle faces I pull whenever any poor soul attempts to take my photo. That will give me something to practise over the winter months!!

Aww I thought as I saw a promising pair of wings up on the thatched cottage roof. A fairy....yes indeed. Good from afar, but bluddy scary when seen at close quarters! I think in retrospect I prefer the peacock even though I assumed it was a pheasant at the time! 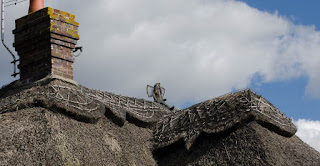 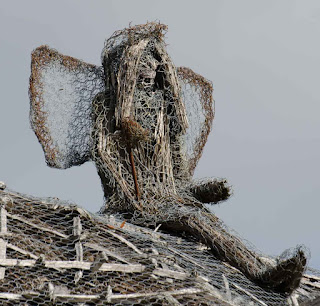 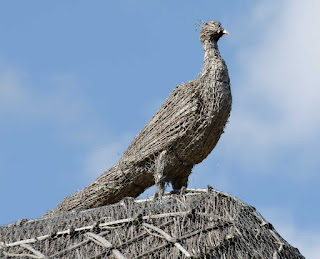 Normally the decent photos I show are taken by Mr GBT, but on this occasion this is one of mine. I was rather pleased with how it came out with the duck just peeking out over the top of the brick wall. 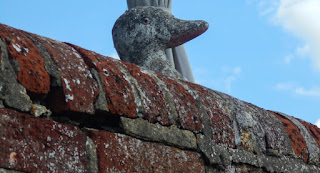 Hope you enjoyed the ramblings of how we spent our Silver Wedding Anniversary itself at Chidham, Boxgrove and Bosham.