I've been wanting to visit Boxgrove Priory for ages and once we'd made the decision to head down Chichester way last week, it made sense to make the best use of our fuel by adding this one in.

The Priory started out life as a modest sized 12th century monastery founded by the Abbey of Lassay in Normandy.  Rather like Tewkesbury, it's survival was down to its conversion to the parish church of St Mary and St Blaise following the dissolution in 1536. Even factoring that in as you can see a fair chunk is now in ruins and the original guest house for travellers remains standing next door [it belongs to English Heritage, but is free entry] 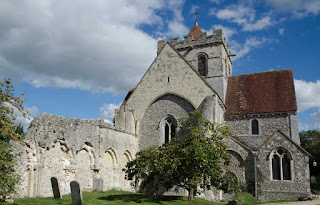 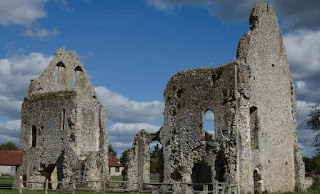 Inside the church it is a wonder with remains of ancient wall paintings sitting harmoniously alongside modern windows such as this or the memorial window to Billy Fiske who was the first US serviceman killed in WWII. 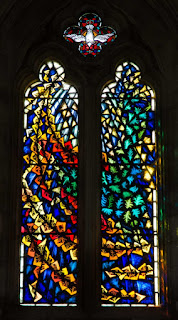 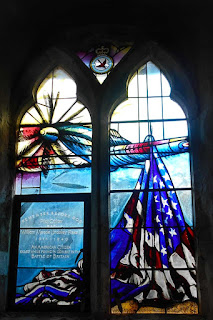 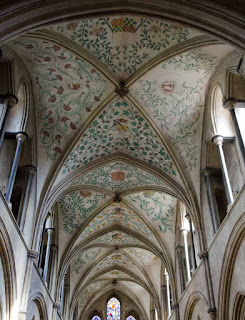 For any church crawler/lover of weird non Christian carvings this is the jewel in the crown. 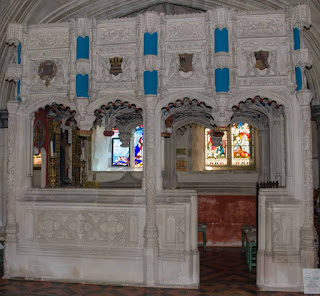 The De La Warr chantry chapel. Under usual circumstances these have normally been badly knocked about, but this is the single complete and undamaged example in the country. It was commissioned by Thomas West [Lord De La Warr and patron of the priory] as the last resting place for him and his wife Elizabeth. That never happened as he was accused of being part of a conspiracy [never a good idea to cross Henry VIII unless you had a death wish] and to get himself out of hot water he agreed to swap the entire site for a former nunnery in Whewell [Hants] after it caught the eye of Old Coppernose. It is a confection of the bizarre, charming and traditional when it comes to the carved images. These were a few of my favourites.

The boys are scrumping and the lady at the bottom is catching the apples in her apron.

A beast which apparently has an additional eye in its rump.

A rendition of the danse macabre where the skeleton is leading the young lady to meet her maker. 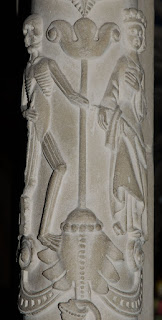 There's an overwhelming sense of peace and tranquility at Boxgrove. Having spoken of Chidham last week I'll post about the final part of our tour tomorrow.