Last week at Mythago practice we started to learn a new and, as yet, unnamed dance. To help us all remember it our squire filmed it on his phone and pinged the link over the next day. It runs sideways on if you view it in Youtube so he suggested that it was probably best to watch it either on our phones or i-pads.

Now I have a slight problem with this tech. My phone is middle aged like me and doesn't take kindly to be forced to change screen direction [occasionally she complies, but normally she just chooses to haughtily ignore me] and I don't have an i-pad. However, I accepted that if a crick in the neck was the price to pay then I'd go with the sideways option. Mr GBT though had a brain wave and changed the pc screen round...... 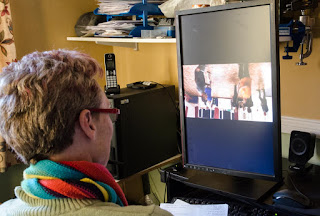 As you can see our experiment wasn't entirely successful as it turned it upside down instead....ah well it can't be said that I haven't looked at the thing from all angles now can it!! I'm not a total technophobe, but a part of me does still secretly hanker after having a TV like this one which I saw  at the NT property of  Nymans this weekend.

It's going to be an expensive day today. That wretched cat has been fighting and is now sporting a rather large abscess on his front leg, so I feel a whopper of a vet's bill coming our way. There will be lots of cuddles and fuss needed when he gets back after being sedated to have the thing drained!