Now I personally think these triple hares [or tinners rabbits as they're also known] are tremendously clever in the way they share ears. 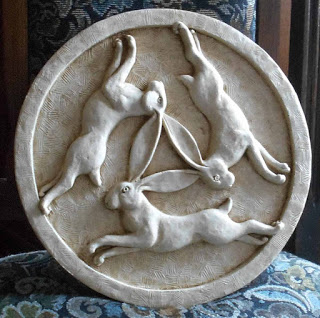 The motif appears in many different contexts both religious and secular all over the world stretching back to ancient times. Seen in the Christian church some would argue it has a pagan origin others that it represents the Holy Trinity. It's not an argument I'm going to get into...each to their own and all that. As yet I haven't seen one in situ, but there 's a Three Hares trail you can follow down in Devon.

Whilst I wait patiently to see an original one with my own eyes [they're not here in Sussex as far as I can tell this roof boss from last week takes the whole sharing thing to another level....eight heads, but only eight eyes eh! Part of the Tudor roof in Boxgrove Priory, West Sussex. 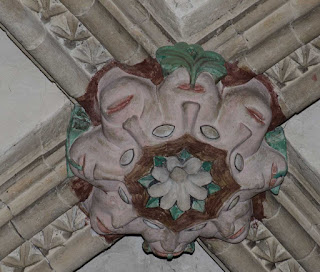