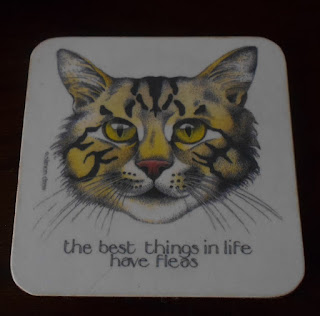 This is my regular coaster and I have to say that I have to disagree with the sentiment. Poor old Humphrey will agree as he has to undergo the monthly humiliation that is the flea treatment. He hates it with a passion, but needs must and all that!

March is the month for all things flea related in the folklore world and on 1st it was known as the "Black Army" when the fleas appeared or when "the devil shakes a bag of fleas at your door." . Even Royals weren't exempt. During work on Whitehall Palace in 1962 a wardrobe full of clothes belonging to Henry VIII was uncovered....complete with lots of mummified Tudor fleas [from "A Dictionary of Sussex Folk Medicine" by Andrew Allen]

So once having got them what was one to do to get rid of the little blighters....in Sussex it was suggested that you flung open all your windows and doors to hasten their exit. In other parts of the country you were told the opposite. Perhaps a more practical approach was needed to solve this itchy issue.

Mrs De Salis advised in one of her books in 1890 that you should fumigate with brimstone or simmer fresh pennyroyal leaves and then lay them out on the bed. Alternatively people looked to herbs such as fleabane, mugwort, wormwood and rue which are plants full of insecticides released when strewn on the floor or burnt. This knowledge isn't just limited to humans though. Evidence shows that birds such as starlings use these plants as part of their nests to keep such pests down.

Is it all bad news then for the humble flea....whilst I don't welcome them you have to admire them when you discover it can jump 30000 times non stop and when it does it accelerates 50 times faster than the space shuttle. Additionally they can pull 160000 times their own body weight....I don't see any humans being able to pull 2679 double decker buses without any assistance. Finally Pulgas Vestidas was a Mexican art form popular which saw dead fleas being dressed up in the early 20th century....here's the evidence http://timcockerill.com/main/curiosities/mexican-dressed-fleas/