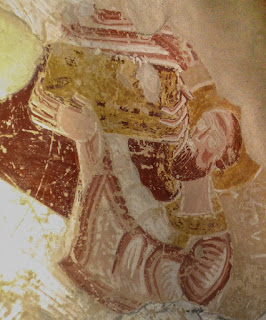 West Sussex has its fair share of ecclesiastical gems, but many of its churches are devoid of the richly decorated stone/woodwork that I encounter elsewhere in the country.  There are several country churches which are simple stone and whitewashed affairs, but charming for it. What we do have though is an embarrassment of riches when it comes to wall paintings. They're damaged, but what remains is fantastic. This one comes from a tiny Downland church at Coombes.

With the library now allowing us to order books I have at long last been able to get my paws on "Churches and Chapels of the South Downs National Park" by David Parsons and Robin Milner-Gulland. They give an excellent explanation about how most of these paintings were done on wet plaster [fresco] so the artists needed to make swift progress. Later ones tend to be on dry plaster [secco] so there was more time to add in intricate patterns and details, but the colours don't last as well.

The one at Coombes is early. I had thought that perhaps the pigments were made from ochre, but the yellows and reds actually come from the greensand beds in the North Downs. Within the spectrum they could be anything from a pale pink to purple or cream to brown. The white and black came from lime and charcoal. Certain colours are absent because they were very expensive to produce. The blue from Lapis Lazuli is one that many will have heard of, but it was rare. However, the painters of the day managed to achieve a blue effect by mixing a few particles of charcoal into white. The light causes it to appear blue apparently and this comes with the very official sounding name of "Rayleigh Scattering".

The best news of all for Mr GBT is that this week's reading has produced at least one more target for me to visit with wall paintings....I am imagining his "delighted" [read that as pained😆 expression when I break this to him]. He does so love a wall painting!!