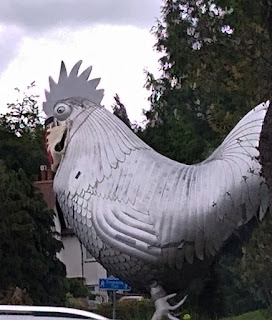 Another one in a very occasional series of themed posts about "exciting things seen on roundabouts". We were travelling so a rubbish photo, but this is the rather splendid Dorking cockerel. It's based on a type that was bred by the Romans for its meat and when it was first installed it wasn't popular. However, times have changed and he's become a bit of a local celebrity in the past ten years. The local knitters have great fun keeping him on trend and as the moment he's sporting a natty mask with "Be Kind" on it. At Christmas he had a long knitted scarf and on one occasion a large baby's dummy hanging round his neck. It's the work of sculptor Peter Parkinson from the Fire and Iron Gallery in nearby Leatherhead. I know we're nearly home when I see him!
Arilx
at July 29, 2020