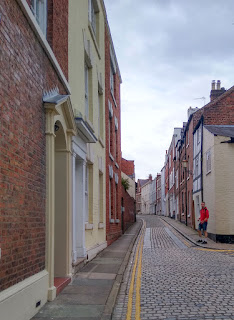 The final uni run to Chester has been done and the house cleared.  He caught the 5.30am train home on 17th March as he feared getting stuck with a possible lockdown looming on the horizon and hasn't been back since. I'd be a lying toad if I didn't say that we were a little apprehensive at the prospect of using the motorway services and needing to stay overnight in a hotel. However, am glad to say that despite it all being slightly odd everything was fine. What we found was that you need to plan ahead so we took all our food and snacks with us and had a takeaway at the house.
Once we had shoved [and I mean shoved] all the TYM's clobber into available bags/boxes we headed out for a final mooch around this lovely city. We meanwhile have now gained a garage full of stuff which he can have a glorious time sorting through/recycling this week. Am mightily relieved that he decided to leave his airer behind for the two mates that are staying on for another year as it would literally have been a case of either he or the airer making their way back to Sussex independently as there was no more room in the car....had we opened the boot there would have been a cascade of possessions tumbling out. He had apparently acquired rather a lot more in the two years since we'd dropped it all off!
I hadn't intentionally included TYM in this shot, but it rather sums up the end of a fabulous three years for him. There's a little sadness, but he's a positive lad with lots of new and exciting things on the horizon to look forwards to. Besides all being well he's going back up in a few weeks to sink a few [or many I suspect] beers with all his mates...the current situation might have denied them the big knees up they would have had at the end of term, but I am confident that they will more than make up for it!!
Arilx
at July 28, 2020