...will be 4th July and I definitely won't be celebrating Independence Day [I don't qualify as a non American!] nor beetling down to the local inn...not because I'm a boring old fart, but simply because I'd rather wait until the novelty has worn off and it's all settled down a bit. Never having been a lover of crowds at the best of times, this has not changed during the last three months.

Instead we will be celebrating Mr GBT's birthday with a special day out for which I have managed to prebook tickets and a takeaway round at my parents. For the first time we won't have to cancel if the weather Gods decide to not play ball as we can eat inside [adhering to social distancing]....whoever thought that in itself would be a special treat.

So with the world opening out just that little bit more tomorrow should I even be admitting that what I miss most is the churches and the library. I might ahem just have happened to have compiled a modest list of some of the books I am hoping to borrow when ours is back up and running...ever the classy bird that's a leftover scrap of wallpaper I'm using. 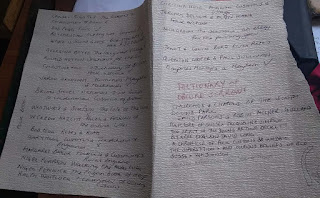 That little lot should keep me out of mischief in the coming months. With that in mind I have found the perfect quote which just about sums me up!


"People can lose their lives in libraries. They ought to be warned."
Saul Bellow